Pinsents “an example to other big firms” on Twitter use, report says 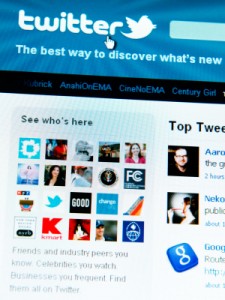 Pinsent Masons is an example to others of how to make the most of a Twitter account, while the ‘private’ setting on Slaughter and May’s account makes it the firm not to emulate, according to a report on the use of social media by large City law firms.

Firms were rated according to the frequency they updated Twitter content, their willingness to engage in dialogue, their use of images and video, and their consistency of tweeting.

The report’s premise was that Twitter has an “intrinsic ability to elevate legal firms and reinforce their business strategy”, such as helping to generate leads, recruit employees, increase brand awareness, and develop client relationships.

Social media strategies adopted by the 20 London firms analysed ranged from using Twitter as a simple vehicle for promoting corporate publications to a highly interactive forum for engaging with graduates and clients.

Produced by Manchester-based digital marketing agency Online Ventures Group, the report singled out Pinsent Masons as an exemplar in particular because of its willingness to tweet on non-legal subjects and engage with graduates.

It said: “Pinsent Masons’ Twitter account is one of the few… which [tweets on] non-legal matters on a regular basis… for example… on important news events.” Its graduate account “is good at nurturing dialogues between the company and its potential new employees… [and provides] graduates with genuinely helpful advice”.

Pinsent was also praised for producing “social content [which is] visually engaging. Their reports often include images and photographs which makes their account appear more eye-catching and dynamic”.

The firm’s appeal to non-legal followers was valuable, the report said. “The very nature of the legal industry means that lawyers must engage directly with a variety of businesses across a limitless amount of sectors.”

It concluded: “Many legal firms could look at the example from Pinsent Masons. They successfully manage to tweet about a variety of topics and appeal to a wider range of audiences than other legal firms. This is incredibly important for raising brand awareness and generating leads for any business.”

The report was critical of Slaughter and May’s decision to close its Twitter account to all but confirmed ‘followers’ – the only reviewed firm to have done so. This was a misunderstanding of the medium, it suggested. “It would be wrong to think that Twitter should be used primarily as an exclusive and private tool for businesses in the legal sector.”

By doing so, the firm was missing an opportunity. “When used properly, social media has the capacity to generate leads and develop customer relationships… In a digital age where brand awareness and customer acquisition [are] paramount, Slaughter and May are not reaching their social media potential…

“Exclusivity and privacy limit Slaughter and May’s outreach capacity. One of the key goals of social media is to increase brand awareness and generate client interest in your business. With a closed Twitter account, Slaughter and May fail to do this on a popular and widespread level.”

Other firms that came out well in the report included Allen and Overy for having multiple Twitter accounts, including one for graduates; Freshfields for the quality of its tweets and use of video content; and Linklaters for having frequent and engaging tweets. Herbert Smith Freehills’ active following of other useful accounts was highlighted, as was Hogan Lovells’ use of eight separate accounts relating to different industries.

A spokesman for Slaughter and May said the firm’s approach simply reflected the firm’s discretion towards its clients and their affairs. He pointed out that the firm used Facebook actively to communicate with potential recruits among students, and also publicised its involvement in deals through press releases.