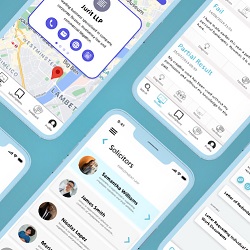 An app for SMEs and individuals which uses artificial intelligence to help diagnose and solve legal problems has almost completed its largest investment round so far.

Ambitious plans revealed by the company include new products, such as litigation funding, providing office space, and expanding beyond legal to complementary services, for example accountancy.

Legal Utopia, which was founded in 2017 by law graduate Fraser Matcham, is seeking to raise £200,000 this time. By this week, with three weeks to go, it had raised £170,000. The three previous rounds put together raised a similar sum.

It assists users in identifying more than 400,000 everyday legal problems through its Legal Checker function, and provides more than 5,000 legal documents, 24,000 FAQs and 10,000 pages of legal guidance, as well as the ability to find and book appointments with lawyers.

Annual subscriptions cost £60 for businesses and £50 for individuals, while visitors to the app can buy credits to pay for legal content at £7 each.

Paresh Kathrani, the company’s interim chief data officer, told Legal Futures that the company’s plans over the next three years were  “incredibly ambitious”.

This would include litigation funding to clients if necessary, while “when people are working from home, we will provide a one-stop solution, for example, office space so they can come in and hold their meetings.

“Within that particular space we want to bring in non-legal service providers such as accountants and financial services and other services that clients might need to solve their particular issues.”

Mr Kathrani said that, in the immediate term, the company was developing its diagnosis software to become “more of a chatbot service”.

Plans also included making the Legal Utopia app accessible to other businesses “so as to provide the platform, should any other companies wish to host it. It would [also] bring their services within that ecosystem”.

The app could be used overseas “as a gateway to legal services in this country”, he added – Legal Utopia recently attended a trade expo in Dubai.

He continued that a marketing campaign would be elaborate, covering 11 ‘channels’; “not just social media”.

Mr Kathrani concluded the “key strength of our business model” is that there was a “broad customer base” and that the service would appeal to both SMEs and individuals, including those with low incomes.

The company employs more than 20 staff and is recruiting 10 more at the moment, mainly to bolster its IT team. In the long run it expects to have more than 70.