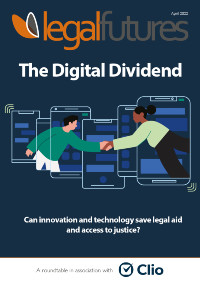 When talking about legal aid and access to justice, it is hard to look beyond funding. Even the Ministry of Justice has acknowledged the problem, to judge by its agreement to pump an extra £135m into the criminal legal aid budget.

Realistically, though, the government is not going to make up the funding shortfall. So, what else can be done?

We recently held a roundtable, sponsored by Clio, to consider how the type of innovation and technology we are seeing in the wider legal market can support law firms and not-for-profit providers to deliver their services.

In this report, we hear from leading figures from across the access to justice world about how innovation and technology has already changed the way they work and where it can take providers in the future. You can download the report or view online and also watch video excerpts from the discussion.

Our latest special report, produced in association with Temple Legal Protection, looks at the role of after-the-event (ATE) insurance in commercial litigation post-LASPO.

We are at a time when insurers, solicitors, clients and litigation funders work ever more closely to create funding packages that work for all of them, with conditional fee and even damages-based agreements now part of many law firms’ armoury.

Do discuss this, we held a roundtable bringing together senior commercial litigators to discuss their use of ATE, the challenges they face and how it could work better for all. It was an excellent debate on current litigation trends, approaches to litigation insurance and how it may be improved.

Should the merits threshold for litigation insurance be lowered? Should insurers embrace new approaches to premium pricing? How should ATE be combined with third-party funding? And how should solicitors navigate the ATE market?

These are issues that all commercial litigators should be addressing. This report should help spark those discussions. 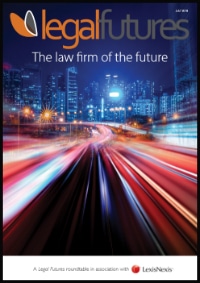 Legal Futures Roundtable Report in association with LexisNexis Enterprise Solutions: The law firm of the future

No larger firm can ignore the demands of innovation – that was the clear message from our most recent roundtable, The law firm of the future, sponsored by LexisNexis Enterprise Solutions.

It comes in many forms, predominantly but not just technology, and is not simply a case of automating process. Expertise and process are not mutually exclusive.

Some of the points raised were familiar – the danger of simply putting your best lawyer in charge, the changing career expectations of the next generation of lawyers, and questions over whether the current training regime is fit for the future.

There were also fundamental issues about the conflict between greater efficiency with billing targets and, ultimately, partners’ take-home pay. Can you persuade your partners that doing work quicker and cheaper than before will benefit them in the long run through more clients?

Happily, there is no doubt that the strategies and technologies are out there to help firms compete in this increasingly complex and variegated market. Reading this report will inform your thinking. 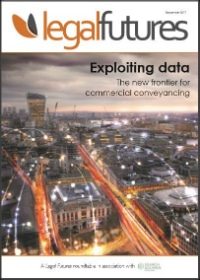 The working practices of property lawyers have changed little since the 19th century. Many aspects of the conveyancing process remain offline – documents are still on paper and the data entered manually. The commercial transaction process is laborious, slow and expensive, and both the client and firm are losing out as a result, a maddening thought in today’s world of digitisation, artificial intelligence (AI) and blockchain.

We held a roundtable with Search Acumen to discuss what data means for commercial conveyancing. A discussion that started with the growing sophistication of property searches ended up at a vision of the commercial law firm of the future, shaped and staffed very differently from now. Those who are scared of ideas like blockchain should look away now.

In our discussion, Law Society vice-president Christina Blacklaws also emphasised the risk of solicitors not grasping this opportunity – that others will come along to dictate the future, leaving lawyers on the sidelines and part of a vision somebody else is creating. There have been many examples of lawyers not taking the initiative and suffering as a result; maybe here, with a process to which lawyers are so central, there is a chance to reverse this trend. 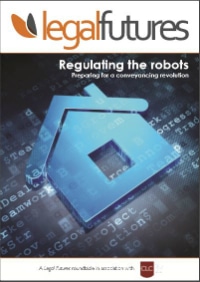 Legal Futures Roundtable Report in association with the CLC: Regulating the robots

The march of the digital conveyancer continues apace, from the government planning to create the largest repository of open land data in the world, to the rapid adoption of sophisticated technology by conveyancers, such as chatbots and artificial intelligence.

So, how does legal regulation keep up with this? In association with the Council for Licensed Conveyancers, we convened a roundtable of industry experts to consider the current state of the market, the changes that technology could bring, and how the regulator should adapt.

It was clear from the discussion that the greatest challenge will be to devise a regulatory framework sufficiently flexible that it does not require constant tinkering as the technology continues to develop – regulation has always had the problem of constantly trying to catch up with the market. It has to balance protecting consumers with encouraging innovation for the benefit of those consumers. This is no easy task. 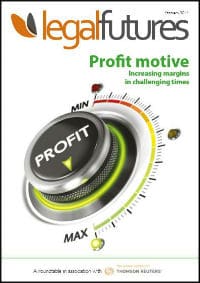 This Legal Futures roundtable report, published in association with Thomson Reuters, looks at what SME law firms are doing to grow their profit margins at a time of economic uncertainty and ever-greater competition.

What was so striking about the debate was that despite the very different practices represented around the table, the approach was largely the same. From bespoke property law advice from a traditional partnership to largely automated personal injury work from a limited company, there was more that united our participants than divided them – although the continuing role of the partnership was one of them.

Putting a few lawyers around a table invariably produces a stimulating and challenging discussion, and this was no different. There will always be a place for SME law firms, and this roundtable – showcasing their ability to focus, experiment, and succeed – shows how valuable they are to the legal ecosystem. 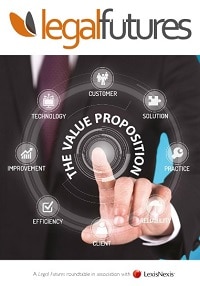 This Legal Futures roundtable report, published in association with LexisNexis, looks at what we call ‘the value proposition’ – how innovative firms have set upon a distinctive path and are ploughing them with vigour and success.

We gathered representatives of various firms around the table who show that it is not all about alternative business structures and radical ways of delivering legal services – it can also be about more subtle changes to form and focus that set firms out from the pack.

There is, of course, much to treasure in the traditions of the legal profession that have grown up over so many years, but there is equally no reason to preserve them in aspic.

We also tackled what LexisNexis’s Bellwether report earlier this year called ‘The riddle of perception’ – which showed that many lawyers do not know their clients quite as well as they think they do. The firms around the table showed that, however, some do. 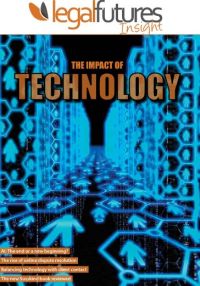 Insight: The impact of technology

The fourth issue of Legal Futures Insight takes on arguably the biggest issue in the market today: what technology means for legal practice.

The purpose is not to look at what has become commonplace technology, but instead to look to the future, such as to artificial intelligence. We investigate how advanced data processing and contract analysis have delivered some spectacular results already, while virtual assistants could lead to a new breed of ‘knowledge worker’, who will not be a lawyer or accountant. Is AI the end of the lawyer, or actually liberation from more routine work?

Then there is online dispute resolution, which looks likely to be introduced in a new HM Online Court. It may mean many local courts may no longer be needed, but is this credible given that court technology is currently in the Stone Age?

And what does technology mean for client interaction? Where should the tech end and direct dealing with clients begin?

Finally, one man with always his eye on the future is Professor Richard Susskind, and we evaluate the radical predictions he and his son make about the advance of technology in their new book, The Future of the Professions. 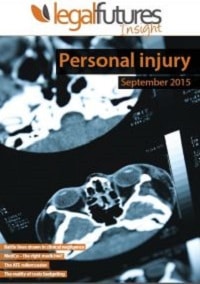 The third issue of Legal Futures Insight delves into an area of legal practice that has been in constant turmoil over recent years: personal injury.

MedCo has been the source of constant headlines on our sister site Litigation Futures in recent months, and in this issue we explore what is going well and what not so well. With the process of weeding out some of the worst offenders now underway, is fragmentation of the market for medical reports is a good thing or will it only lead to more confusion?

The other most pressing issue of the moment is clinical negligence. Once seen as a safe haven from mainstream personal injury, it is facing a double-pronged assault: caps on fees in low-value cases (although what the government considers low value is very different from claimant lawyers), and an end to the recoverability of after-the-event (ATE) premiums for experts’ reports. We look at both issues and the state of the ATE market more broadly.

Finally, with the suspension of budgeting for negligence claims in the High Court from next month, three leading costs lawyers give their very frank views on what the problems are and what the way forward might be. 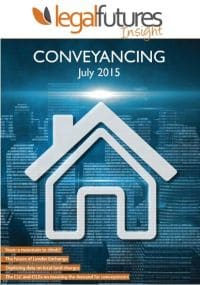 The second issue of Legal Futures Insight explores some of the big changes shaping the future of conveyancing.

With award-winning marketing, massive investment and a later than expected launch, Veyo has finally arrived. Leading conveyancers, including the head of a top five firm, the new president of the Law Society and licensed conveyancers myhomemove give their very different reactions.

Lender Exchange has been with us for longer, but it is only this year that it has signed up virtually every active conveyancing firm – almost 5,000. Insight 2 finds out whether Lender Exchange, and its smaller rival LMS, will make life simpler, easier and quicker for conveyancers or add to their burdens.

Meanwhile we investigate how the Land Registry is trying to drag the world of local land charges into the 21st Century by digitising data traditionally kept by local authorities. Search providers are divided on the issue, with one predicting that “the likelihood of it going smoothly is almost zero”.

Meanwhile the property market has been extremely healthy, particularly after the general election. Sheila Kumar, chief executive of the Council for Licensed Conveyancers and Victoria Hurdley from the Chartered Institute of Legal Executives discuss their plans to tackle increasing demand for qualified staff, while responding to the changing market.