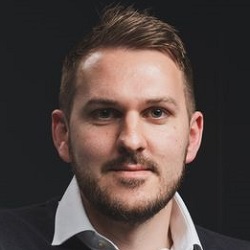 Dunlop: Legal services should be designed around way lawyers interact with clients

A former Team GB badminton player who abandoned his dreams of Olympic gold to become a solicitor and now a legal tech entrepreneur has launched a digital contracting product that already has several high-profile business customers.

Former athlete Tom Dunlop said realism about his sporting prospects steered him towards the law, while his competitive instinct brought frustration with the profession and made him feel more at home in the legal tech sector.

Who embraced change and innovation, he predicted, would separate winners from losers among law firms.

The product he hopes will bring about change, artificial intelligence-backed contract review app Summize, claims to be “unique” in that it is designed to integrate with common software such as Microsoft Teams, Word and Google Chrome to maximise adoption and reduce friction.

So far more than 100 businesses use the platform, including Everton FC, Vodafone and Fujifilm.

Mr Dunlop told Legal Futures that he first decided to discard his badminton career when he was training hard and travelling the world with the England team before the 2012 Olympics.

He was doing a law degree at the time. He knew he was very good but realised the commitment of going for gold would be taking a chance at a crucial time in his young life.

He was not enjoying the sport so much after he left the junior England team and became a full-time professional, because much of the earlier “collegiate spirit in the team” was absent.

“It was very much about you as an individual”, he said. “When I looked around, I thought the chances of me becoming the Olympic gold medallist probably weren’t that strong.

“I could still be very good and be very highly ranked, but I had to ask myself whether it was better to get into a more mentally stimulating career.”

Also, badminton was not known for paying particularly well. It helped that, when he finished law school, he found a local business created by a former lawyer who had set up a sports management agency. “It felt like the perfect next step because it combined sport with law.”

Upon qualifying, after a year he decided to become an in-house lawyer in a tech firm, which he felt suited his “natural impatience” more than being in a law firm.

“The environment in commerce, in terms of being a lawyer, was fast paced, with a mentality of ‘grow, grow, grow and scale up’. For me was a good balance.”

He had an “entrepreneurial mindset” and had started a comparison website for lawyers when at BPP University Law School, called Compare Legal Solutions.

“That wasn’t because I was a techie at heart. It was because there was an obvious problem… and the solution was to put it online, compare them and make it easily accessible.”

When working at a law firm, Mr Dunlop said he confronted the problem of delivering advice to clients and devised a technological solution to the question of ‘how can we provide our advice in a better format, rather than just a really long email?’. It involved an application to present clients with video via “an online [document] where you could insert media as well as advice”.

He said he was doubtful a traditional law firm operating a partnership model and charging by the hour was sustainable: “My view is that legal services [should be] designed around the way that a lawyer interacts with a client.

“A lot of what we’re trying to do is bring that human element and to make [advice] easier to understand − to bring legal services into the modern age where it becomes more accessible, more on demand.”

Part of accessibility was providing a product that integrated with popular platforms already in use, he said.

“We think that by nature a contract needs to be easier to create… Businesses don’t want to interact with 18 different SaaS [cloud-based software] products in their day-to-day life. We need to come to where the business user already is.

“If you’re using X software, then we want to plug into that. We don’t want to replace it or try and take you to another unfamiliar tool.”

Mr Dunlop said his “vision for the next generation of legal services”, was that a law firm should operate “as if it is an in-house legal department for their SME clients”. He observed: “They can only do that through tech.”

Ultimately, he said, winners in the legal market, including lawyers, would be those which can “adapt to change and innovate”.

“Whatever that product or service is, the leader of the business has to constantly drive innovation, to change the environment and not get stuck in the old ways.”

Disruption in the legal market would not necessarily come from non-lawyers, as Jennifer Swallow, the outgoing head of LawtechUK recently forecast.

Mr Dunlop said: “But I think it will be a company that has a technologist as the leader [who] is willing to change and innovate with the times. I think whoever does that will naturally win in any industry.”