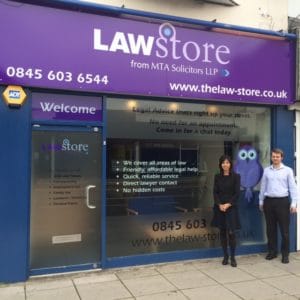 MTA Solicitors, the alternative business structure behind the consumer-facing high street LawStore brand, this week opened its third store and plans to open a fourth by the end of the year.

Business through the brand has been so brisk that MTA, originally a bulk personal injury business that has since diversified, has begun to sign up panels of local law firms to deal with instructions it cannot handle.

The Portsmouth LawStore follows the prototype, which opened in a shopping centre close to MTA’s headquarters in Bromley in 2010, and a further store that opened last month in Gravesend, Kent. The fourth store is set to open in Beckenham, also in Kent, by the new year.

MTA, which also has offices in London, Manchester and Cambridge, has fixed its panel at a maximum two local firms, with free membership for up to a year after which, depending on the success of the venture, a fee-sharing deal will be negotiated.

David Green, MTA’s managing partner, told Legal Futures that pressure was building on the brand to open at more locations. The firm was also becoming “more generalist” because of private client and commercial work generated by LawStore.

He said that currently some 25% of potential instructions were going to waste because the firm lacked the ability to service them. “We are processing internally 50-60% of all incoming inquiries that hit our business.

“We probably lose 10-15% because we don’t have the necessary expertise, but the rest of it because we are unable to meet clients’ requirements locally.”

MTA considered a franchise model for LawStore when it was first launched, but discounted the idea because the business “lacked traction” at the time, he said. The solution the firm was currently pursuing was the panel scheme.

“We have done it by looking at some smaller firms and saying ‘if you’ve got a particular specialism, if you can do certain work, we can start to pass out recommendations and referrals to you’.”

Mr Green said that the more the firm advertised LawStore as a national brand and the more it became established, the more calls came through from outside the area. “As a service provider I feel we are letting down our customer base if we cannot provide the service. Isn’t it crazy that we get a call coming in from a customer wanting a legal service and we can’t provide it?”

He gave the example of a telephone call he had taken earlier in the day, from a potential client in Hull looking for family law advice. “He said ‘I want to see a solicitor and really don’t want to talk over the telephone’.”

Also, the LawStore brand was beginning to generate a significant volume of instructions from local businesses, heralding the promise of higher-value work to come, Mr Green reported. He cited a call he had taken regarding the sale of a “restaurant-type business” on the outskirts of Bromley: “A £100,000 transaction; it came through the LawStore brand.”

He said that in his experience, while about half of clients were happy to secure “telephony-based online legal services”, the other half were not and wanted to see a lawyer in person.

The LawStore brand had struck a chord with the public, he suggested, because it achieved the right balance of approachability and informality, combined with the convenience and visibility of a high street location.

“People coming into a store are not coming into an office with a big desk and a secretary sitting behind it, or coming into a big reception with six floors above you full of lawyers.

“There is always a qualified lawyer in-store. If they are available, the person can go and see them. If not, we book them in for another meeting or they’ll get a call at home in a couple of hours. They can actually get some immediate support in a more consumer-friendly environment.”

But Mr Green admitted MTA had made mistakes with the LawStore formula at first. Its front desk staff had actually been dressed too informally and had not conformed to the public’s expectations of lawyers.

Equally, while price was important, it was “not the be-all and end-all”, he said. “A while ago we were doing very low price consultations and the reaction was ‘well, why? You must be rubbish if you’re only charging me £20 or £30’. People would start questioning you as to why it was so cheap.”

“So we got that wrong as well. Now we’ve got decent pricing for a consultation and people are happy to pay it if they feel comfortable with what they’re being sold – and they seem to be.”

LawStore is one of a number of legal brands launched by MTA. They include Legal Advance, a legal membership club, Positive Collections credit control and debt recovery service, and My Online Vault, an online service that allows clients to store and manage critical documents. Among other businesses, the firm owns property law firm Solex Legal Services, which it acquired in 2013.