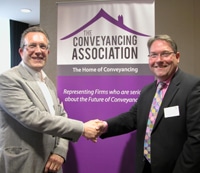 The growth of property fraud means that lenders’ open panels of conveyancing firms are at an end, the director-general of the Council of Mortgage Lenders (CML) has warned.

Speaking at the Conveyancing Association’s (CA) summer reception in London, Michael Coogan argued that, with fraud loss estimates reaching £1 billion, the vigorous responses from lenders to take more control of their panels is understandable.

He predicted that the trend was likely to accelerate ahead of the Financial Services Authority (FSA) publishing its findings on financial crime in June this year and pushing for tighter measures to avoid mortgage fraud.

Mr Coogan said: “There has simply been too much fraud, and poor professional performance, for lenders to accept the business risk of allowing anyone in the profession to introduce business to them.

“Once the FSA has published its work on financial crime, I expect lenders will be more vigorous in their responses when problems arise, most of whom will put in place arrangements to identify problems earlier, rather than having an unquestioning assumption that problems will not rise as they are dealing with professionals. Put simply, they will want more direct control and ‘control’ costs.”

Mr Coogan said many lenders remained unsure about the impact or influence of the Law Society’s Conveyancing Quality Scheme. He suggested that some lenders will find industry panel management arrangements more attractive unless the scheme reaches critical mass.

CA chairman Eddie Goldsmith, partner at Goldsmith Williams in Liverpool, said: “It is absolutely true that we have reached the end of lenders’ open panels and removal from them will soon become a stark reality for thousands of firms unless they take a stronger stance on issues such as mortgage fraud.

“We have already seen major lenders such as Lloyds Banking Group and Nationwide reduce the number of companies on their panels and I believe others will follow in their footsteps.”

Mr Goldsmith predicted that the FSA report would act as a catalyst for change. “Our members recognise that unless they are quick in taking appropriate action and ensuring they have rigorous measures in place, they could be left in a vulnerable position.”

He said the CA has been talking to lenders and stakeholders on the issues around fraud to understand what steps can be taken to ensure its members are operating at required quality levels.