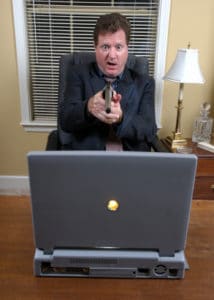 A recorder candidate loses patience with the JAC

The integrity and reliability of the high-profile process to recruit 100 recorders are “in doubt” after applicants suffered yet more IT problems, the chairman of the Criminal Bar Association has warned.

Last month, the Judicial Appointments Commission’s (JAC) website crashed under the weight of up to 2,500 solicitors and barristers trying to take the online qualifying test.

As a result, all applicants were put through to the second stage – the plan had been to eliminate 40% of them – which took place last week.

According to Francis FitzGibbon QC, “a number of people received the email with the test papers earlier than their pre-booked slot – some by as much as 45 minutes – so when they logged on they discovered that they only had 25 of the allotted 70 minutes left.

“I have heard of one case of the email arriving 10 hours before the slot. Those who called the help-line got advice that conflicted with the instructions on the email. Some were told to wait until the start time, others that the clock ran from the time the email was opened.

“Anyone who used of the extra time to study the test papers would have had a clear advantage over those who did not, and over those whose time was cut short.”

On top of this, the scenario part of the test paper was published on the JAC website in February, as a specimen paper in a ‘dry run’ exercise. The paper was, therefore, available to anyone who underwent the ‘dry run’ and/or shared it with others.

Mr FitzGibbon said: “It scarcely matters whether the numbers who are known to have taken part in the dry run were small, as the JAC maintain, because the integrity of the process has been compromised.

“Anyone with prior notice of the scenario had a clear advantage over the rest. It would not have been hard to deduce what the questions would be about…

“The problem is that the total failure of the first round, and the significant flaws in the second, will cumulatively erode confidence in the whole process. Its integrity and reliability are in doubt.”

In a statement on its website, the JAC said it was aware that some candidates were “concerned” about the early or late receipt of their scenario test email and the time available to complete the test.

“In such cases, where candidates were in contact with the JAC, they were reassured about the timings involved and when their time slot would start.

“It was also brought to the JAC’s attention that material related to the scenario used – but not the test questions set for candidates – appeared on a section of the JAC website. The material was removed immediately and it was quickly established that it had only been accessed by a small number of users.

“The JAC will ensure that no candidate is disadvantaged in proceeding to the next stage as a result of these issues.”

It said the test were being marked by independent panels, each comprising a lay JAC panel member and a judge, and candidates would be contacted with the result by mid-April.

The next stage of the selection process involves a telephone assessment and self-assessment, after which successful candidates will take part in a selection day in July. Final selections for appointment are due to be made in November.