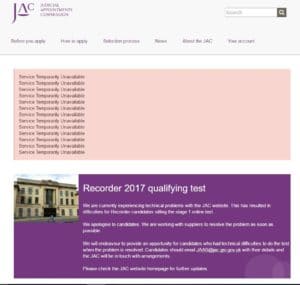 The Judicial Appointments Commission’s (JAC) website crashed yesterday under the weight of up to 2,500 solicitors and barristers trying to take the online qualifying test that marks the first stage of a recorder recruitment competition that Lord Chancellor Liz Truss highlighted for its potential to improve diversity on the bench.

Lawyers had only had between 4pm and 10pm to take the 75-minute, two-part test, with some reporting that they had completed the first part before the site went down, but did not know whether their answers had been captured.

Either way, the failure leaves the JAC with a headache because some candidates will have seen the questions.

In various statements on the website – before it went down completely – the JAC acknowledged that the volume of candidates caused the problem.

“We apologise to candidates. We are working with suppliers to resolve the problem as soon as possible. We will endeavour to provide an opportunity for candidates who had technical difficulties to do the test when the problem is resolved.”

In an announcement last Friday, the JAC said the near-2,500 applications was an unprecedented number – it had 1,250 for the last recorder competition in 2015 – so it was well aware of the traffic the site would receive.

Indeed, in an article for the Solicitors Journal last month, JAC vice-chairman Lord Justice Burnett wrote: “We recognise there were technical IT problems that frustrated some candidates in 2015 and we are as confident as we can be that they have since been ironed out.”

Part 1 of the test examines situational and part 2 critical analysis. It is marked automatically and the results were meant to be e-mailed to candidates on 27 February.

The 60% with the highest marks –provided they scored a minimum of 40% on each part of the test – will go on to the stage two ‘online scenario test’, which is currently scheduled for the same six-hour period on 7 March.

One barrister applicant, Marc Beaumont, told Legal Futures: “I completed the first part and clicked to submit it. The system then crashed. I have no idea if it was successfully submitted. The website then locked me out completely, not even recognising my password. According to Twitter, other applicants suffered a similar fate. I decided to give up and go to the gym.”

Leon Kazakos of 2 Hare Court tweeted a picture of the website saying he had completed the test when he said he had not even started it.

In a series of tweets, leading employment silk Sean Jones of 11KBW tried to take the events with good humour: “I think it is time for @becomeajudge to admit defeat, appoint everyone and send us a Tunnocks wafer as compensation.”

In a major speech last November, Ms Truss identified this competition as one way to improve diversity on the bench as it would simply be the best 100 candidates who succeed.

“No longer will they be required to have experience in any particular type of law, be it crime, family or civil,” she said. “Nor does it matter where they live, as applicants will no longer be bound to a specific location.”

Yesterday’s problem could also prolong what was already an extended timeline. JAC commissioner Martin Forde QC said last week that due to the large number of applications and four stages, the competition would “inevitably take longer than our 20-week target. It is planned to take 34 weeks to complete from launch to recommendation”.

Separately, the Supreme Court has announced the process of appointing two or maybe three new justices, the most ever appointed at one time.

Adverts will appear from today encouraging applications for vacancies created by the retirement of Lord Toulson last summer, and forthcoming retirements of Lord Clarke and Lord Neuberger, currently president of the Supreme Court.

The court said that “to encourage the broadest range of applications and achieve the most efficient process for all involved”, the vacancy created by Lord Toulson’s retirement last year was not filled immediately and instead two candidates would be appointed from this selection round; a third will be appointed from the same pool of candidates if Lord Neuberger’s successor as president is appointed from within the court.

The appointments process will be overseen by two independent selection commissions. The one recommending the two new justices is chaired by Lord Neuberger, and its other members are JAC chairman Lord Kakkar, a surgeon, the Lord Chief Justice Lord Thomas, Professor Nichola Rooney, a clinical psychologist, of Northern Ireland’s JAC, and aviation consultant Deirdre Fulton from Scotland’s.

Lord Kakkar will chair the panel charged with finding the new president, and will be joined by current Supreme Court justice Lord Mance, Lord Thomas, Professor Rooney and Ms Fulton.

Candidates are shortlisted and interviewed by the panels. Where two candidates are deemed to be of equal merit, the commission can give preference to one candidate over the other for the purpose of increasing diversity within the court.

After interviews, a report is sent to the Lord Chancellor for her consideration. There is another round of consultation with the senior politicians and judges. The Lord Chancellor then accepts the recommendation(s), or can reject it, or ask the commission to reconsider.

The new post-holders will take up office at the beginning of the new legal year in October 2017.