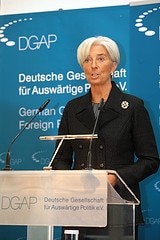 The Legal Services Board (LSB) has stepped into the controversy around the International Monetary Fund’s (IMF) push to make countries receiving financial bailouts reform their legal professions as part of the deal.

Last month, the American Bar Association and Council of Bars and Law Societies of Europe (CCBE) wrote a joint letter to IMF managing director Christine Lagarde to express their growing concern that the demands from the so-called Troika (the IMF, the European Commission and European Central Bank) would erode the independence of the profession, the rule of law and the administration of justice (see here and scroll to the end).

The Irish government, for example, is set to introduce completely independent regulation of lawyers, having rejected an English-style compromise of an oversight regulator.

n a letter to Ms Lagarde – which was copied to Lord Chancellor Ken Clarke – LSB chairman David Edmonds said that concerns of the ABA and CCBE were not well-founded.

“The introduction of such arrangements for the legal profession as those proposed by the IMF has had quite the opposite effect in England and Wales. The changes brought about by the Legal Services Act 2007, rather than diminishing the principle of the rule of law, embed it…

“By binding the LSB to statutory duties and ensuring that it can be called to account by Parliament, the Legal Services Act guarantees that the board is run independently of government.”

Mr Edmonds argued that consumer confidence in a regulatory regime run by those who are regulated by it, and focusing only on individual conduct without considering wider competition and consumer issues, cannot be sustained, “not least when set against the backdrop of developments in financial markets in recent years”.

He concluded: “Independent regulation goes hand in hand with market liberalisation. If consumers can have faith that regulation protects their interests, they can be empowered to make choices on services that best meet their needs.

“By removing the barriers to entering the legal services market, and in particular the restrictions on capital investment and management responsibility for non-lawyers in law firms, we expect to see a more competitive market and increase incentives to innovate and offer services at lower cost.”