Judge explains himself in writing after phone hearing fails 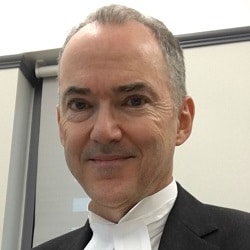 A High Court judge has been forced to issue a detailed judgment in writing because his voice was “breaking up” at the end of a telephone hearing with a litigant in person (LiP) and the law firm suing her for fees.

Mr Justice Murray said there was “nothing I could do immediately” to remedy the problem with the BT Meet Me conferencing service being used for the hearing, and he decided it would be necessary to give reasons in writing.

Murray J said “almost all” of arguments put forward by the LiP, Dr Diana Okonkwo, challenged the refusals on paper and at an oral hearing of her application for permission to appeal, but she had no right to make a further challenge.

He said Dr Okonkwo, sued by Quality Solicitors Harris Waters for unpaid fees, alleged that High Court enforcement officers were “corrupt” and she suspected she was “a victim of fraud”.

Murray J said: “Although I was able to hear all of the oral submissions made by Dr Okonkwo in support of her application, as well as the brief oral submissions made in reply by Mr Waters, it became apparent, while I was in the course of giving an ex tempore judgment on the application, that the parties were having difficulty hearing me, due to the audio of my voice ‘breaking up’ on the line.

“As there was nothing that I could do immediately to remedy that difficulty, I concluded that, rather than giving a full oral ex tempore judgment, it would be necessary to give my reasons in writing, following the hearing.

“I indicated that I would be dismissing Dr Okonkwo’s application for permission to appeal and that I would provide my reasons for doing so in a written judgment. The parties each confirmed that they had heard that indication before the hearing ended.”

Harris Waters, based in Ilford, Essex, obtained judgment by default in November 2018, and applied for a writ of control to enforce it, which was issued the same month.

Dr Okonkwo applied to set aside the default judgment and writ of control in April 2019. It was rejected by Deputy District Judge Billing and she was ordered to pay costs of £1,000.

Murray J said he explained to Dr Okonkwo at the telephone hearing earlier this month that, under section 54(4) of the Access to Justice Act 1999, there was “no appeal from a refusal of permission to appeal”.

As a result, the judge said he could proceed only with her appeal against HHJ Ambrose’s refusal to stay the writ of control.

Referring to Dr Okonkwo’s argument that the writ of control should be stayed because the default judgment had been obtained “by deception”, Murray J said there was “clearly no procedural irregularity”.

The judge said the LiP had made “very serious allegations” against the High Court enforcement officers and the “proper course” was to invoke the complaints procedure at the Sheriffs Office, which Dr Okonkwo had already done.

He said Dr Okonkwo’s bundle included a letter from the Sheriffs Office rejecting her complaint.

Murray J refused Dr Okonkwo’s application for permission to appeal and declared that it was “totally without merit”.