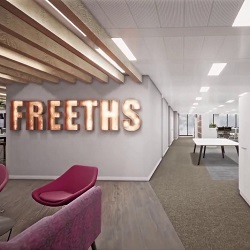 A former equity partner at Freeths has won a disability discrimination claim over the way the leading midlands law firm treated him after he was diagnosed with mental health problems.

In a 187-page ruling, an employment tribunal found that Mike Taplin’s claim succeeded because of a lack of support from the firm once his problems emerged, the way he was suspended for telling an offensive joke during a presentation at a real estate department event, and how he eventually felt forced to resign.

Mr Taplin, a commercial property lawyer, was managing partner of the Derby office from 2008 and grew it substantially, in large part due to his own ability to bring in clients and fees.

He was Freeths’ highest-billing equity partner for five consecutive years to 2017/2018, when he billed £1.14m, even though he worked from one of its smallest offices.

He routinely had chargeable hours of up to 2,600 a year against a target of 1,400, with an additional 200 to 300 hours spent on business development.

However, in 2016 he experienced what a clinical psychologist described as “burn out”.

He was disabled from November 2016 by reason of an adjustment disorder with mixed anxiety and depressed mood, which Freeths knew. At points during the subsequent two years, Mr Taplin contemplated and even took steps towards committing suicide.

The firm did not have procedures in place to deal with a partner in this situation. Mr Taplin had periods of lengthy absence from the firm but the tribunal in Nottingham found that it did not make reasonable adjustments to accommodate him when he returned to work.

It said: “The claimant was an extremely hard-working individual who by his own admission loved to work, he found it difficult to step back.”

Freeths had “benefited over the years from his drive and passion for his work”, but this at least in part “caused or contributed to his ill health”.

Though he was keen to return, Mr Taplin had “difficulty regulating his own workload” and so Freeths had “an obligation to apply their minds to how they could prevent the risk to his health that his work may cause”.

But it did not put in place a clear “holistic” plan to support him, which should have included a wellness recovery action plan, a mentor and setting performance expectations.

Had Freeths made these adjustments, the tribunal said, they would have had “a real prospect” of removing or even avoiding the disadvantage Mr Taplin suffered by reason of his disability of being less able to manage his stresses and workload. This amounted to direct discrimination.

At one point, Freeths chairman Colin Flanagan told him he should be “more positive” in the office even if he did not feel like it.

“To give an instruction to someone with a depressive mental health condition who is taking medication (you have failed to enquire into the effects of), to in effect ‘cheer up’ or at least to appear to be more positive, is grossly insensitive and really, the tribunal find, quite irresponsible and reckless as to the impact on the claimant.”

The tribunal said that, in the lead-up to the conference in June 2018, there were “red flags” about Mr Taplin’s “frenetic” behaviour which “were not heeded because of a lack of understanding about this health issues as a result of a lack of enquiry and a lack of communication”.

There was also “a certain expectation of disaster and willingness to let it unfold” on the part of some.

He was suspended for the joke he made, which involved “sexual crudeness, stereotypical racist descriptions [and] mocking of sexual orientation”.

The tribunal found that Mr Flanagan “exerted his influence over the process to ensure that suspension was the outcome”, in part by withholding information about Mr Taplin’s medical condition from the committee which issued it.

“Mr Flanagan was… instrumental in the suspension of the claimant despite his protestations to the contrary, which we do not find to be credible.”

The tribunal said Mr Flanagan considered that Mr Taplin’s presence while still disabled was going to be a problem for the firm and this played “a significant part” in his decision to influence the committee to suspend.

The two presentations were equally offensive, the tribunal ruled, but it accepted that the committee was told that Mr Taplin’s had caused greater offence – but that did not explain why it decided to suspend him.

The committee failed to consider whether there were other sanctions it could have imposed: “Suspension in the circumstances was not a proportionate response. There were other less discriminatory measures which could have been taken to achieve the legitimate aims.”

Further, there was enough information to put the committee and Mr Flanagan “on notice not only of his disability but the possible link between the claimant’s disability and his conduct at the presentation” – a link that the clinical psychologist later confirmed and the tribunal accepted. It was not his “normal behaviour”.

The tribunal concluded that, although the ‘joke’ was a factor in the decision-making process, “another reason which we find had a significant influence on the decision to suspend, was the claimant’s disability”.

There was further discrimination in the way Mr Taplin was treated during his suspension.

The tribunal said: “The claimant complains of the impact on his mental health of the suspension. He felt unsupported and in his fragile state of mind; he believed that the respondent was engineering him out and… we conclude that his concerns were justified in respect of Mr Flanagan at least.”

Mr Taplin was referred to a second committee for potential gross misconduct but it decided that he should apologise and undergo training, the same sanction applied to the other partner.

The tribunal found that the unlawful acts of discrimination arising from the suspension were “so serious that it would in an ordinary employment relationship have amounted to a repudiatory breach”.

It went on: “The suspension led to a deterioration in his mental health and he reasonably concluded that his position was untenable and he was unable to return to work and he continued to be treated insensitively during the disciplinary process.”

Mr Taplin resigned in September 2018. “The claimant had good reason to feel he had lost the support of the respondent and in particular Mr Flanagan, because we find that he had…

“The tribunal do not accept that the claimant’s decision to resign broke the chain of causation for future losses. The claimant resigned we conclude because of reasons which amount to unlawful acts of discrimination.”

There will now be a remedy hearing. Neither Mr Taplin, who now works at gunnercooke, nor Freeths had any comment.