Clegg: legal profession is not doing enough on social mobility 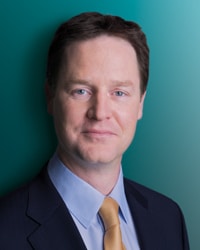 Clegg: it cannot be right that justice for the many is overseen by the representatives of the few

In a high-profile speech to Demos and the Open Society Foundation, Mr Clegg said “intergenerational social mobility is the principal objective of the Coalition’s social policy”, but that government cannot do this alone.

“Some of our key professions still need to do a much better job of opening their doors. To take one example, the legal profession remains woefully unrepresentative,” he said.

“More than two-thirds of all High Court judges and top barristers are privately-educated. Nine out ten QCs are men. Nineteen out of 20 are white.

“I know that us politicians have to get our house in order too. Not least my own party, which is too male and too pale. We are working hard to fix that. But my message to the legal profession, and especially to the bar, is: you are not doing enough either. It cannot be right that justice for the many is overseen by the representatives of the few.”

Mr Clegg said that both the law and politics must, above all, represent the nation as a whole. “But t

he nation is not represented in them. We’ve had years of warm words and incremental progress. It’s time for a step change.”

Bar Council chairman Peter Lodder QC responded: “The Deputy Prime Minister’s comments entirely ignore the Bar’s efforts to improve the diversity of the profession in recent decades. As a result, almost half of those called to the Bar in the last year are female and the percentage of individuals from a black and minority ethnic (BME) background is representative of the general population.

“Unfortunately, this impressive progress is being seriously undermined by the government’s proposed cuts to fees for publicly funded barristers, with women and BME practitioners disproportionately affected in these practice areas, and its decision to increase drastically the cost of higher education.

“Contrary to Nick Clegg’s suggestion, the Bar is doing more than its fair share to widen entry to the profession. The government must do its bit to ensure that the Bar remains open to all.”

This is the second time in recent weeks that Mr Clegg has focused on problems with social mobility in the legal profession. In the previous speech to the Financial Services Lawyers Association, Mr Clegg lauded the legal executive qualification as “the only route to becoming a qualified lawyer that is open to all, regardless of education, social status or background”.

He said: “So if you are serious about social mobility, it seems to be that a huge part of the solution lies right on your doorstep – or at least back in your offices.”