As told to Nigel Wallis, a director at Legal Futures Associate O’Connors 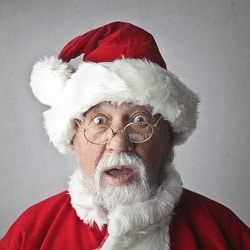 A worrying time for Santa

“I hope you don’t mind me asking but isn’t mid-December an odd time to hold a strategy meeting?” asked ColdHeart, North Pole Logistics’ head of elfin resources. “I mean, isn’t it a bit close to ‘The Big Day’?”

She could tell from the twitch of Santa’s beard that her question hadn’t gone down well.

“With respect,” said Santa, “I’ve been around a long time and, believe me, there’s never a good time to hold a strategy meeting. The fact is, our elfin workforce have voted by a majority of 52% to 48% to remove my image from all our Christmas marketing this year and I want the board to conduct an urgent SWOT analysis to give me the evidence I need to change their elfin minds in a second referendum.”

With a gentle shrug, ColdHeart joined her colleagues as they filed into the igloo and took their seats around the boardroom table.

Santa pulled on a fresh pair of white gloves to stop his fingers sticking to the PowerPoint remote control as IT director BrightSpark flapped about trying to get the opening slide to project squarely on the curved ice wall. “Just don’t blame me if the laptop blows a fuse,” BrightSpark muttered defensively. “It’s danker than an eskimo’s larder in here.”

“Let me start”, said Santa, as the board eventually came to order, “by thanking you all for taking the time out to help me pull together this SWOT analysis. Actually, has anyone seen ArtyPants this morning? I think maybe we should give him a couple more minutes as I’d value his input as our head of marketing.”

As the elves were pondering if this was a question or a statement, the igloo door slid open and ArtyPants appeared amid a flurry of snowflakes.

“I had to drop the kids at nursery because my partner was up all night with Puffin Flu and when I got the sleigh out this morning I realised the reindeer hadn’t been fed and the traffic on the S6 Sleighway this morning was unbelievable, clogged with Christmas shoppers no doubt, and…”

“Thank you, ArtyPants,” said Santa sharply. “Just take your seat as quickly as you can please so we can get this over with and get back to the snow-face. Now, as you know, the first letter in a SWOT analysis stands for Strengths. Can anyone make a start by suggesting what my greatest strengths might be?”

There followed a long Arctic silence, broken only by the cough of a reindeer outside.

“Well, your hair’s neater than Boris Johnson’s,” SkinFlint from Finance said at last, simply to release the unbearable tension. “And you could argue you’ve made red velvet fashionable again.”

“I agree, and Mrs Claus makes much better mince pies than Waitrose,” added Muggins from Legal, before looking back at his smartphone to finish his online grocery order.

“OK, this is good stuff,” said Santa, having read somewhere that you should always praise even the most banal contributions to help stimulate audience participation. “Anything else?”

“You have twice as many followers on Facebook as the Spice Girls,” offered Santa’s godson, who’d slipped into the back of the room to refill the tea and coffee pots as part of his work experience.

“At last,” said Santa, “a proper evidence-based fact I can actually use!”

Such blatant nepotism caused everyone to clam up tighter than a boxer’s fist and set the tone for what happened next.

“OK, OK, let’s move on. The second letter in a SWOT analysis stands for Weaknesses, which I presume we can skip over quite quickly,” said Santa.

“Well,” said ArtyPants tentatively. “I’m not so sure. In this modern digital age, don’t you think your image is starting to look a tad… well… dated? I mean, would it not be more 2019 to replace your image with, say, an androgynous avatar that looks a bit more… how shall I say… with it?”

You could’ve heard a pine needle drop as Santa slowly bowed his head, his hot, salty tears trickling down his ruddy cheeks and off the end of his whiskers like a Blue Planet melting icecap.

“In my heart of hearts, I knew this day would come,” said Santa, choking back emotion like a British tennis runner-up in a post-match interview.

“Perhaps it is indeed time for Mrs Claus and me to retire and let you youngbloods take up the reins. There’s no doubt this modern world is beyond me. Amazon is building robotic warehouses in Lapland and yesterday my godson fooled me into believing social media was run by the British Labour Party. I’m sad to say, I’m defeated.”

“Don’t be a silly sausage, Santa,” said ArtyPants, realising he’d gone too far and alienated the entire room. “I was only joking. We all love you, Santa, and so do the billions of kids who use you to persuade their parents to overspend every Christmas. Heavens, we want you to go on forever and ever!”

At this, all the elves stood and cheered in agreement as Santa’s godson brought in a basket of freshly baked mince pies and his training record for Santa to sign off.

“Leave the workforce to me, Santa,” whispered ColdHeart, with only a hint of menace.

Outside in the chilly stables, the reindeer could hear all the cheering and were giving each other knowing looks. Another stellar year for the company but nothing for us this time, they seemed to be saying.

As if by magic, the lights came on and who should appear but Mrs Claus with pails of steaming bran mash. “We’d be nothing without you, my furry friends,” she said softly.