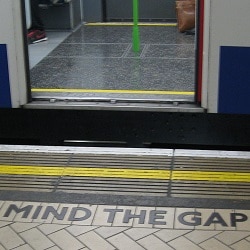 As well as its swanky new digital badge, perhaps the Solicitors Regulation Authority (SRA) could enter in to a licensing agreement with Transport for London to use the iconic phrase ‘Mind the gap’. It could ring out on every website of every firm authorised and regulated by the SRA.

The gap I am talking about is the one between what the professional indemnity insurance (PII) provided by qualifying insurers covers and what the compensation fund covers. It is a surprisingly large gap and so far hundreds of clients, and millions of pounds, have fallen into it.

Before we go and look at the gap, or gaping chasm as some might term it, let’s remind ourselves who does what when it comes to client protection.

The SRA enters into a participating insurance agreement with insurers setting out the criteria for providing PII to SRA-regulated businesses, which in turn are required to obtain PII from a participating  insurer.

The regulator also administers the compensation fund and is the body responsible taking enforcement action against errant solicitors.

But this is not automatically the case. The compensation fund, as administered by the SRA, will need proof of dishonesty. In cases where the SRA have successfully prosecuted a solicitor at the Solicitors Disciplinary Tribunal (SDT) for dishonesty, one can be pretty certain that any application to the compensation fund will result in a grant being paid.

The problem comes where there is no allegation of dishonesty made at SDT. The client applying to the compensation fund then has to prove dishonesty. The SRA will not disclose any of the information it holds about the firm/individual solicitor to the applicant.

Yes, you read that right: even if the solicitor in question has been prosecuted at SDT and received a significant sanction, maybe even been struck off, the client making an application to the compensation fund will not have access to any of the evidence relied upon by the SRA before the tribunal.

The other way in which clients and money fall into the gap is because insurers will not indemnify, and the compensation fund will not make a grant, where the solicitor was providing a service that does not form part of the ‘usual business of solicitors’ and is not a ‘regulated activity’.

It is highly unlikely that any lay client instructing their solicitor in relation to any matter is going to ask that solicitor if the work being conducted on their behalf does not meet these criteria.

Nor is a client likely to ask if the service is an activity that would not be considered legal services under a qualifying PII policy. So there are very clear client protection issues here.

Most lay clients would assume that the purchase and sale of property is the ‘usual business’ of a solicitor. So it would appear perfectly reasonable to them, when buying or investing in property, to pay money to a solicitor. But as I explain below, the fund is not helping those involved in what are termed dubious investment schemes.

Of course, there must be limits on both the compensation fund and the cover provided by PII. If every misdeed committed by a solicitor or law firm was covered, this could exacerbate the situation. There is a risk this would make the fund and PII providers a target for further fraud.

It may sound far-fetched, but with millions at stake, the bizarre situation might arise where fraudsters pretend to perpetrate non-existence (one might say fraudulent) frauds in order to make fraudulent claims on the fund or PII policies.

So the limits on the protection provided by the fund and PII need to be clearly communicated to clients. But at present that is just not happening. The scale of the problem, based on the SRA’s own figures, is becoming overwhelming.

Other than repeat the same warnings that have failed to stem the tide to date, the SRA appears to have no strategy to mitigate this ever-growing risk. At the very same time as the problem has grown, transparency around the running of the compensation fund has shrunk.

It strikes me as strange that, when discussing the rise in compensation fund contributions, the SRA often refers to specific dubious investment schemes, yet I am told that none of the investors in the schemes the SRA mentions have been compensated.

One example of such a scheme is the EcoHouse Brazil scheme. One of the investors in EcoHouse Brazil, who invested via Sanders & Co, an SRA-regulated law firm, told me that he has not been able to obtain a grant from the compensation fund.

He also told me that none of the other investors he is in contact with have been able to obtain a grant.

Between March 2017 and February 2018, SRA chief executive Paul Philip sent three parliamentary updates to Nigel Evans MP, which referred to the possibility of investors claiming on the firm’s PII but in the third update noted the insurer here had refused to pay out, that the firm’s challenge to this was unsuccessful at arbitration, and that the insurer itself was now in administration.

In a letter to John Grogan MP dated 28 March 2018, Mr Philip discussed claims made on the Compensation Fund by EcoHouse Investors and stated: “I need to point out that the purpose of the fund is to replace money a solicitor has stolen or failed to account for and there are legal rules we must follow when considering claims.

“Our current recommendation to the panel is that the activities of the firm [Sanders & Co] were not part of the usual business of a solicitor and our rules do not allow for a payment in these circumstances.”

But it is the SRA that makes the rules for the compensation fund and sets the ground rules for what is and is not covered by insurers under the qualifying insurers agreement. The rules set by the SRA are regulations not legislation and the SRA can amend them at any time, subject to the approval of the Legal Services Board (LSB).

The SRA can also waive its own rules where it feels it is appropriate to do so; for example, where it may assist the SRA in protecting and promoting the public interest.

The ‘our hands are tied’ explanation sounds a bit hollow in these circumstances.

So, if the compensation fund is not making grants to the victims of EcoHouse and other investments scheme frauds, where has the money gone?

Well, a significant proportion of it appears to have gone on the costs of administering the fund.

In the year ending 31 October 2018, the fund made grants totalling £18.1 million and incurred total administrative costs of £10.6 million, meaning of the total expenditure of £28.7 million.

So 37% of its income was spent on: direct cost of processing compensation fund claims (£3.1m), direct cost of intervention and other legal costs (£5.3m), allocated cost of regulatory activity that administers and protects the fund* (£1.2m), and contribution to central overheads (£1m)

(* If anyone has the foggiest what this means, then answers on a postcard please)

Roughly speaking, these figures mean that for every £2 paid out to clients, the fund incurs a cost of over £1. That doesn’t sound very efficient.

And what has the LSB been doing as compensation fund contributions and reports relating to solicitor involvement in multi-million frauds have both risen? What is the point of an oversight regulator if all it does is oversee but never scrutinise?

Back in June 2013, Legal Services Consumer Panel published a report looking at client protection across the legal sector and identified a number of issues it felt needed to be addressed:

These are all very pertinent issues but it appears that neither the LSB nor the regulators have responded to the issues raised by the panel.

One might even say the SRA has gone in the opposite direction, as the last few years have seen even less transparency around the operation of the fund than there was in 2013.

The panel also made a proposal about how to deal with the issues identified. It said: “A more radical solution, but one which should be fully explored, is to join up arrangements across the sector, providing a single umbrella which sets minimum terms and conditions for insurance, as well as delivering a single compensation fund.

“This could have a number of advantages, including a single access point for consumers, potentially lower costs for lawyers (as administrative costs would be longer be duplicated), risk-based pricing unaffected by professional title, and a single point for data collection and analysis.”

Most interesting of all, given the SRA’s determination to proceed with so called freelance solicitors, as well as the existing unregulated legal services market, the panel considered the possibility that such an arrangement “could also provide the possibility for unregulated providers to come under the scheme if they wanted to”.

I am not sure that I agree that one overarching compensation fund and PII arrangement is the answer. How would you calculate contributions to any compensation fund? A flat rate per regulated individual or firm throws up the possibility of the low risk subsidising the higher risk.

One persistent theory surrounding the demise of the Solicitors Indemnity Fund was that the Law Society was not willing to refuse cover to firms that presented an unacceptably high level of risk.

But it appears abundantly clear to me, and no doubt the clients who have lost significant amounts of money, that the current system just isn’t working.

The consumer panel was most definitely right about one thing: there needs to be a solution to these problems and that solution needs to be radical.