A guest post by Pieter Gunst, COO and co-founder of Legal.io 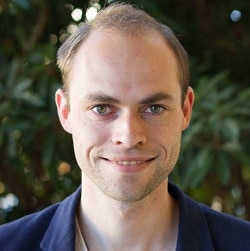 Gunst: It would be naive to think that these technologies will not evolve at an incredible rate

In 1950, Alan Turing asked himself, “Can machines think”? Almost 70 years later, the Turing Test remains unbeaten. But a computer that can imitate human intelligence seems just a matter of time.

The field of artificial intelligence (AI) saw a true Renaissance in this decade. More than $3.6bn has been invested this year in companies that develop AI applications. This is more than the $3.3bn invested in 2016, with another quarter remaining.

Companies such as Google, Amazon, Facebook, IBM and Microsoft have all placed bets on AI in the past few years. Better search results, smarter purchase suggestions, face recognition and self-driving cars are just a few of AI’s applications. In addition, there are more and more tools available that are lowering the threshold for researchers and entrepreneurs to develop AI applications.

As a result, AI is slowly becoming a part of the daily life of the consumer. Intelligent digital assistants like Siri and Alexa can now answer thousands of questions, but are essentially only primitive examples of a series of increasingly complex applications that will have a dramatic impact on our daily lives.

Today, however, AI is still in its infancy. This is especially the case in the legal world, not particularly known for its urge for technological innovation. And as is the case with new technologies, a healthy dose of scepticism is required to distinguish between hype and opportunity. The most sophisticated AI systems still produce non-intelligent false-positives and cannot understand contextual information.

Some of the earliest AI implementations hint at these obstacles. A company called Northpointe built an AI system designed to predict the chances of an alleged offender to commit a crime again and was accused of engaging in racial bias, as it held that black offenders were more likely to commit a future crime than those of other races.

Several companies in the US and Europe have with some fanfare announced the first ‘robot lawyers’ in the past years. But even the shortest interaction with these applications immediately makes it clear that their scope is very limited. The first legal robot passing the Turing Test is still a number of years away from us.

Until now, applications of AI remain limited to a number of specific applications, typically within a particular legal domain. Companies such as Kira use AI to automatically analyse the text of contracts, claiming to provide 20 to 90% in time savings without sacrificing accuracy.

Lex Machina, a start-up founded at Stanford Law School and purchased by Lexis Nexis in 2015, analyses data from patents and judgments. The software can, on the basis of natural language processing (an AI subdomain), automatically divide judgements into relevant categories, identify arguments that have a greater chance of success with a particular judge, and summarise judicial decisions.

A more recent category of AI applications targets the consumer directly. Initiatives like DoNotPay and Belgium’s Lee & Ally promise an interactive experience where a consumer can get legal assistance from a digital assistant, often as part of a natural conversation. Today, these solutions typically rely on more rigid decision trees, and AI forms only a limited part of the application.

Developing a true robot lawyer capable of fulfilling the incredible variety of possible legal tasks is an enterprise of enormous scale and complexity. But modern AI techniques are getting better and better at analysing huge amounts of unstructured data.

Further evolutions in this technology will ultimately lead to a revolution in the legal field, but the road will not be without challenges.

For the time being, we are not yet at the point where we can emulate the creativity and empathy of a human lawyer. However, it would be naive to think that these technologies will not evolve at an incredible rate, and will be able to handle increasingly complex issues, inside and outside of the legal world.

All of this may be somewhat disconcerting, especially for younger generations of lawyers who find themselves in a rapidly transforming labor market. But in that transformation also lies the opportunity. Developing intelligent legal applications will require the contribution of a new generation of lawyers, who are at home in both law and technology.

The possible outcome is a legal system that is efficient, offers more scope for empathy, and is flexible in the context of a society that is changing increasingly rapidly. Code is law, and our generation is seated at the keyboard. Let’s make good use of the opportunity.