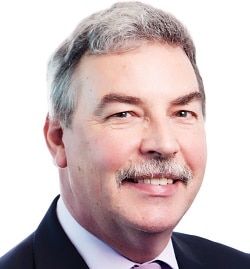 Harvey: Blockchain is a great innovation

Blockchain? What’s that? Do you wear it? Do you pull it? Do you tie ships to the quay with it? Or do you use it to replace your and your customers’ in-house ledgers with one centralised digital record of transactions?

A year ago, my knowledge of blockchain was at the ‘What’s that?’ end of the spectrum. Now that I am beginning to understand a little bit about what this technology is and how it works, I can see that it has potential to transform the way insurance is transacted at all stages – purchase, implementation, claims handling – all in seconds rather than days or weeks.

Early on I was told that blockchain is a database, but that is an over-simplification. It is a distributed ledger, which means that it is an electronic record of all transactions conducted through it and it is accessible to all its users.

Once information is put into it, it cannot be changed. If that information contains an error or needs to be amended, the only way that can happen is by the replacement information being added to the blockchain.

Both old and new data are visible and are ‘time-stamped’. Blockchain technology has proved very resilient to attempted breaches. Reports of hacking attempts being successful relate to peripheral systems, not the core blockchain technology.

What ‘distributed’ means is that the ledger is visible to all permitted users and can only be amended in accordance with the permissions granted to each user. An attempted fraudulent amendment by one user would not be possible because of the ‘permissions’ barrier built into the blockchain design.

Blockchain is the technology that underpins Bitcoin – indeed, it was developed for that purpose – and the ever-growing population of cryptocurrencies also use it.

However, the bad name that Bitcoin has (in some quarters) does not mean that blockchain itself is tainted. It is a great innovation that can be used in all kinds of situations completely unrelated to digital currencies.

So-called smart contracts stored on a blockchain can enable completion of transactions that would traditionally take weeks or months in just seconds.

A smart contract is an agreement or set of rules that govern a business transaction. It is triggered automatically by the transaction and may contain self-executing or self-enforcing clauses that cause the terms of the contract to be fulfilled.

The recent report of a Swansea dentist buying a property in Trowbridge in three days using blockchain technology is testament to that. The core transaction took all of four seconds. There are many comparable situations in the insurance industry where many of the same components for contractual activity exist.

A potential major objection about its design is the fact that data is not removable once it is in the system – GDPR alarm bells ringing loudly in the background! However, the regulatory requirements can be addressed by means of controls of user access permissions, which mean that in effect specified data can be ‘forgotten’.

Blockchain is only one element of the technological/digital revolution underway – artificial intelligence is another element that has no direct link with blockchain, although the two can undoubtedly work together to produce automated solutions at a fraction of the cost, at much greater speed and with greater efficiency than traditional ways of conducting business.

Adam Woodhouse, director of CIO services at KPMG points out that the insurance industry needs to invest a lot more to obtain the top-to-toe overhaul of process that is need for the benefits of digitalisation to be realised. Allianz is a member of the B3i group of insurers seeking to achieve exactly that end.

I would answer the question in the heading of this blog with another question – can insurance thrive without blockchain?

Thirty years ago, digitalisation of communication with e-mail seemed revolutionary. The speed of change in the digital realm seems to increase steadily year by year and blockchain is no more than another step along the road of making the most of what digital technology has to offer.