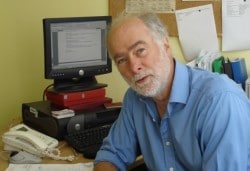 An online NHS Direct for law, supported by 30 law centre-type operations in key areas around the country, should form the basis of a radical new approach to publicly funded legal services, according to a leading legal thinker.

Delivering the JUSTICE Tom Sargant memorial annual lecture last week, the legal charity’s outgoing director Roger Smith said the cuts embodied by the Legal Aid, Sentencing and Punishment of Offenders Act 2012 “slice so hard into the heart of legal aid” that the system needs to be radically reformed and rebuilt from the bottom up.

This means starting with the interests of the person who has a problem, and forgetting the interests of the legal profession, he said. “It is harsh but out must go any consideration of the value of legal aid in protecting the Bar, young lawyers, high street solicitors, black and minority ethnic practitioners. If these are in danger – and they are – then it is up to the professions, not government, to remove any unwarranted discrimination and the market to identify the winners and the losers.”

Further, he said legal aid needs a coherent policy objective which is more than an anodyne version of the widely used one of providing ‘access to justice’. “The basic policy goal has surely to be that anyone in society, rich or poor, is entitled to expect that any dispute is settled on its own intrinsic legal merit and not by the extraneous issue of the different resources of the parties. We can call this equal justice under law.”

With that in mind, consideration of how people might get equal justice begins with how they might know what their position is, not how they get a lawyer. “We need to look at basic sources of information. We are in the midst of an information revolution. How can we use the Internet?

“Much existing internet advice is, frankly, little more than digital leaflets but there are the beginnings of attempts to use the Internet’s possibilities – for example, Co-op Legal Services and the work of firms like Epoq in combining document assembly programmes with telephone or video communication. How could the state inspire a good level of interactive information and advice using new technology? Can the public and the private work together in some way on the challenge of providing basic knowledge?”

While at the moment the government is proposing a commercially run telephone ‘hot line’ as the gateway for advice, “seemingly staffed by non-professionally trained call centre workers linked to a commercial organisation selling legal services”, Mr Smith asked: “Why is there no consideration of the provision of something like Legal Direct to replicate NHS Direct?

“If we cannot afford face-to-face services why can’t we put on the net a diagnostic alternative that provides everyone with a basic service? Perhaps we need a competitive innovation fund to kickstart provision.”

However, he recognised the ‘digital divide’ and that some people will not use the Internet. Mr Smith, who last week received a lifetime achievement award at the Law Society Excellence Awards, said: “JUSTICE costs about one third of a million a year. You could get three organisations like JUSTICE for one million – three lawyers, three support staff. For a mere £10m you could get 30.

“You could start to consider how for a tiny transfer within the budget you could have 29 law centre type operations around the country in areas of the greatest deprivation in terms of use of the internet plus a national centre of excellence. You begin to have an interesting and innovative pilot to run in which you could retain the spirit of the NGO sector and the commitment to a universal advice provision.”

He pointed to work being done in Holland to develop online mediation in family matters as another example of what technology could offer. “This is the kind of development that the UK needs to follow. People going through divorce will not have an easier time because of the withdrawal of legal aid: they will still need support and they should not be abandoned. The state should acknowledge responsibility for their plight even if its policy is to encourage commercial sources to develop cheap online assistance that can be offered to all.”