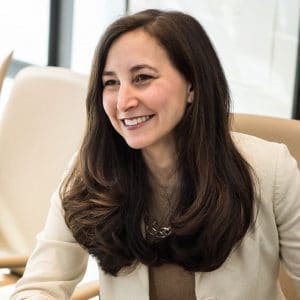 A former senior counsel for Lehman Brothers investment bank and artificial intelligence (AI) technology pioneer has predicted AI will be crucial in helping companies alter thousands of contracts rapidly in the aftermath of Brexit.

Ms Anisman, who is chief operating officer of the technology law firm she co-founded, Bortstein Legal Group, said law firms would have to apply the knowledge they gained in adapting contracts to comply with the EU General Data Protection Regulation (GDPR) earlier this year.

Speaking to Legal Futures, she said: “I see financial services more than I see other industries, so I know for sure there is a mandate in a lot of legal departments to be very proactive in how to use AI and other tools.

“GDPR has been the most recent use of it and there are a lot of firms now going to be turning their attention on a purely contract basis to Brexit, now it is becoming kind of clearer as to what Brexit means…

“I’m sure there is going to be a big rush to remediate contracts and because it’s going to be very difficult for internal legal departments, even with the support of outside counsel, to do this on their own, quickly, my sense is these tools are going to have to be [adopted].”

She added that the versatility of the technology was essential to legal departments. “Machine learning is really what’s useful about AI, [namely] that it gets smarter over time as you train it to look for the right kinds of provisions.”

Ms Anisman said it was increasingly common for general counsel to look to AI: “The tool is able to search in a very quick and concentrated way, so companies in all industries are turning more and more to AI.

“A lot of general counsel have reached out to their teams and said ‘we want you to be figuring out ways you can be using technology more so that you can turn your attention to doing higher value work or risk management in the company instead of spending time reviewing contracts’.”

She pointed out the pressure on both parties to a contract to become compliant with Brexit would not necessarily be shared equally: “You are… dependent on the other party cooperating and not everyone has the same incentives that regulated entities do to make those changes.

“A bank, for example, has to make those changes but not every vendor is going to be under the same pressures to make that happen.”

She said many large companies had tens of thousands of contracts that will need to be changed in a very short period of time.

“Obviously because you are negotiating with the counterparty you cannot just unilaterally say ‘the contracts are changing in the following ways’ – you need someone to agree and countersign”.

TMG has used it to analyse a large volume of supplier contracts, in order to identify areas of current and future risk, and Luminance said that, in two weeks, it has been able “to streamline and automate the contract analysis without disrupting TMG’s existing workflows”.

In a statement, they said the move “combines the comprehensive legal services offering of Elevate with the data science team and AI engine of LexPredict, creating more sophisticated technology-enabled solutions for law departments and law firms”.

The plan is to build on “the AI-enabled contracts repository management, abstraction and search they have already developed together, adding AI-enabled intake, assessment and workflow”, and focus on bringing increased efficiency to regulatory work including LIBOR, GDPR and Brexit.

They also plan to develop AI-enabled tools for outside counsel billing guideline compliance and predictive modelling for pricing and planning of litigation and transactional matters.

We reported last December that Elevate, which has a London office, had signed a memorandum of understanding with south-east England law firm asb law to meet the needs of in-house counsel without bulking up the firm’s own business.