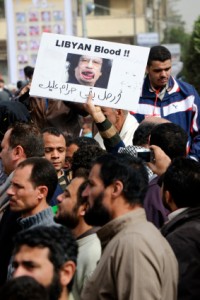 A former City solicitor has launched what she believes is the first global claims management company in a bid to bring together businesses affected by the crisis in Libya.

Nina Hall, a one-time Herbert Smith and Vinson & Elkins lawyer who is now a director of Global Arbitration Litigation Services (GALS), says she has already attracted $1.1bn of claims, including from a major international construction company.

She is bidding to persuade governments to use money belonging to Colonel Gaddafi and others in the Libyan regime that has been frozen, to pay companies in certain circumstances.

Ms Hall said her experience of processes with aspects of international state responsibility – such as the UN Compensation Commission to deal with claims arising from Iraq’s invasion of Kuwait in 1991 – is that claimants are “more likely to be successful as a group than as individual claimants”.

They also need to pursue these claims privately because public authorities either do nothing or take too long to act, she added.

GALS has set up a back office capable of handling mass international claims. Ms Hall has experience of such schemes, such as the Swiss banks’ Holocaust claims process.

Ms Hall is working with Dallas & Co, a law firm in Reading and London run by one-time Herbert Smith partner Irene Dallas, as well as US firm Ober Kaler and an unnamed French practice. Ms Dallas has many years’ experience of working with clients involved in Libya and is currently acting for several claimholders with outstanding payments.

Though GALS is operating primarily as a claims manager, it is also a third-party litigation funding broker and Ms Hall said there are a couple of clients “who have lost absolutely everything” as a result of the conflict for whom she has arranged funding if needed.

There are three classes of claims: commercial claims with forms of legal security outside the territory of Libya, including enforcement of judgments or arbitration awards, dated prior to the freezing of Libyan assets on 26 February; general claims arising out of the conflict which may give rise to a potential claim for reparation in accordance with international law; and pre-existing claims against Libyan authorities where the cause of action pre-dates 26 February.

Claim holders can choose either to pay in the normal way, based on a percentage of recovered funds or a blend of the two. There is also a fixed fee of £350 on entering into a services contract with GALS to begin to process it.