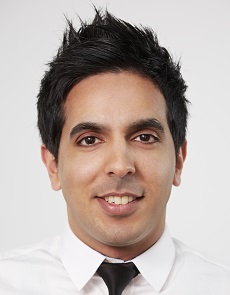 Anwar: Firms realise that they have to raise their game

Times are tough for claimant personal injury (PI) lawyers, but while many expect substantial consolidation in the market over the coming 18 months, competition is becoming fiercer than ever, according to new research.

Marketing collective First4Lawyers said advertising spend and costs were spiralling upwards both online and on TV as firms look to grab greater shares of the market.

The hardening competition extends also to clinical negligence work, which is seen as a more positive environment in which to practice.

First4Lawyers analysed a snapshot survey of 65 firms, along with statistics from Google and BARB (Broadcasters Audience Research Board).

Some 42% of PI respondents revealed that their profits had fallen over the past year, and 43% said staff numbers had gone down too, even though for most firms, turnover had either stayed the same or increased.

Nearly half said the costs of doing business had increased, with a third having increased their investment in marketing.

However, most were fairly bullish for the year ahead, with most expecting profit and 76% turnover, but not staff numbers, to rise.

But they were less positive for the claimant market as a whole – most expected an increase in closures, mergers, WIP sales and redundancies over the next 18 months.

This was against a background where 47% saw no likelihood of the government watering down the reforms in the Civil Liability Bill; an optimistic 15% thought it would, however.

Most respondents have tried to do their bit, with raising the issue with their MP or on social media the most popular tactic – 30% had also talked to their clients about it.

Asked how they envisaged the PI market looking if the bill became law, the most popular answer was that insurers would continue pushing for yet further reform, while 67% predicted that new claims management companies would will step in to act for litigants in person, leading to a new mis-selling style scandal.

But 47% thought the profession would find a way to handle small claims.

In terms of turnover, profit and staff numbers, clinical negligence specialists were significantly happier with the past year – 30% said profit had increased, while it stayed the same for 61% – and 43% predicted profit to rise over the next 12 months, with 36% also expecting more work in that time.

Shifting responsibility for fixing costs in clinical negligence cases worth up to £25,000 from the Department of Health to the Civil Justice Council was better than leaving it in the hands of civil servants, according to 72% of respondents, but half still expected the end-result to be a bad deal for claimants and their lawyers.

The survey also looked at the impact of Lord Justice Jackson’s broader fixed costs proposals. Most thought fixed costs were OK for the fast-track but no further.

The review of PI marketing showed a steady increase in the volume of advertisers across all areas of PI and clinical negligence during 2017. As such, the general cost of marketing has increased month on month.

The market has seen more and more firms diversify into clinical negligence, which is having a direct impact in the cost of marketing. There were 50% more advertisers online in the third quarter of 2017 than in the first quarter, and this is driving increased competition, with the average cost per click increasing by over 70%.

In most advertising categories, there has been a 15 to 20% increase in the number of advertisers but in some areas, such as work accidents, there are more advertisers than ever before.

First4Lawyers said the strategies taken by certain competitors were adding further pressure to the market. It is seeing more advertisers driving high bidding strategies to achieve higher positions for intense periods of the working day. This is driving the overall increased spend levels.

First4Lawyers managing director Qamar Anwar said: “Whatever the outcome of the government reforms, there will still be injured people looking for legal assistance. The question is where they will go and our analysis of the market shows that firms realise that they have to raise their game and their profile.

“It is not an easy time but the smart firms, with clear strategies and effective marketing, will ensure that those injured people have access to proper advice, rather than leaving them to the clutches of unqualified chancers.”