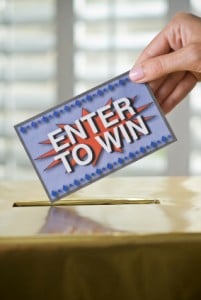 Prize draws: claims companies will not longer be able to get around the rules

The Solicitors Regulation Authority (SRA) is under pressure to ban solicitors from offering potential claimants up-front inducements to bring an action so as to bring them in line with new rules coming into force for claims management companies (CMCs).

Following a consultation, the claims management regulator at the Ministry of Justice (MoJ) has decided to push ahead with extending the current ban on offering “immediate” cash payments or similar benefits, to all inducements for making a claim.

This would include offers to pay cash after the claim is accepted – which gets around the “immediate” restriction – as well as prize draw competitions that some companies run for potential customers. Cash inducements range from £20 to £500, the consultation paper said. “Similar benefits” include gifts and shopping vouchers.

The change was supported by most respondents to the consultation, but several made the point that there would not be a level playing field with solicitors, who are not prevented from offering inducements. The move is a direct result of Lord Young’s review of the compensation culture, in which he described such inducements as a high-pressure marketing technique, and the consultation response noted that Lord Young wrote to the SRA in similar terms.

It added: “The SRA have also stated that they are currently reviewing their rule framework and although they cannot confirm whether or not their rules will be amended to compliment the proposed ban on inducements, they consider that a cross-sector approach is needed if any intervention is to be made by the government.”

The consultation response also flagged up a wider-ranging review of the claims management rules later this year, which among other things will consider the issue raised by some respondents of whether refer-a-friend schemes should fall within the new ban.

The plan was to introduce the ban from April, but this will not now happen because it has to be considered by both the government’s regulatory policy committee and the reducing regulation committee “A further announcement will be made in due course regarding implementation,” the consultation said.