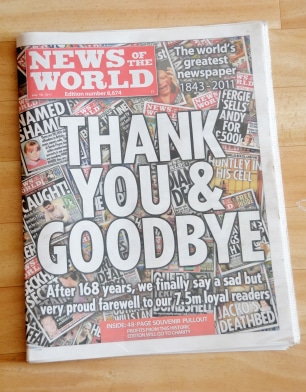 News of the World: hacking might constitute an attempt to pervert the course of justice, says Law Society

The Solicitors Regulation Authority (SRA) has launched a formal investigation into the role of solicitors in events surrounding the News of the World phone hacking scandal.

SRA chief executive Antony Townsend said: “On the basis of our preliminary review of the material in the public domain, we have decided to instigate a formal investigation. The first step in this investigation is to obtain the evidence necessary to ensure a thorough investigation, using the powers we have under the Solicitors Act 1974.

“We have set that in hand today. Further decisions will depend upon the review of that evidence and any further inquiries we need to make.

“We will pursue our investigation vigorously and thoroughly, but emphasise that our inquiries are at an early stage, and that no conclusions have been reached about whether there may have been any impropriety by any solicitor.”

Meanwhile, the Law Society has expressed “grave concern” after claims by solicitors that their phones may have been hacked by the News of the World, “perhaps in an attempt to undermine their legal claims against the newspaper”.

The society said it has been contacted by members of the profession who police have notified about possible criminal activity.

Chief executive Des Hudson said: “Hacking into solicitors’ phones would be very serious indeed, and we urge the police to carry out a full investigation. If hacking was carried out with the intention of undermining court action, it might well constitute an attempt to pervert the course of justice, which is a serious criminal offence.

“In any event, it is a shocking breach of the privacy of both solicitors and their clients… I will also be writing to Lord Justice Leveson asking him to investigate these allegations.”