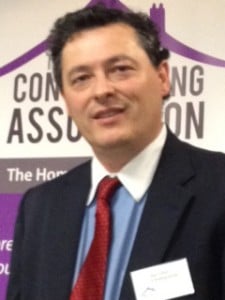 Mortgage lenders need to agree a system that allows them collectively to vet law firms that want to be on conveyancing panels, the head of mortgage fraud at Lloyds Banking Group said yesterday.

While expressing disappointment at the take-up of the Law Society's Conveyancing Quality Scheme (CQS), Paul Collins also revealed that Lloyds is exploring the introduction of ‘net lending’ – where loans are made net of redemption monies – so that money does not need to pass through a solicitor's client account.

Speaking at an event in London organised by the Conveyancing Association, Mr Collins said that rather than have “20 lenders doing 20 different things”, they should co-operate to use a third party that would undertake a single piece of due diligence on law firms.

Each lender could then apply their own risk criteria to decide whether they wanted to accept specific firms onto their panels, while the firms would only pay a single fee to cover the whole process.

He said there was an opinion forming among the big lenders that “something needs to be done” and that a forum might be set up early in 2012 to start working on solutions to the current problems with mortgage fraud.

Conveyancing Association chairman Eddie Goldsmith backed the idea of a single due diligence process, saying: “What we don’t want is to have to complete 10 sets of different forms for 10 different lenders and pay 10 different charges.” He called on the Law Society and other representative bodies to work with his association and lenders on this.

Mr Collins stressed that Lloyds was committed to retaining a large panel providing national coverage and local solicitors for every bank branch, and that he does not want separate representation to be “the end game”. Lloyds insists on separate representation for sales of £1m or more – “the risk is extreme above that level” – but Mr Collins said he did not expect that threshold to fall.

He explained how Lloyds has taken control its panel in the last two years, removing “dormant” firms and the “dabblers”; there is a correlation between lower volumes of work and higher risk, he said. Firms then fill out a membership form from which they are categorised as either low, medium or high risk.

Medium-risk firms undergo checks over issues such as their credit score, while high-risk firms are visited by a company called Decision Insight Information Group to undertake due diligence on their processes. For example, Lloyds has a “low tolerance” for sloppy charge registration, he said.

Mr Collins emphasised that “sole practitioners have a place on our panel”, saying his experience is that they pose no greater risk than firms of two or three partners, and that a proper appeals process is available for firms which have been rejected.

He said the bank’s losses from mortgage fraud involving solicitors have dropped “quite considerably” over the past two years as a result of its improved risk management, although the number of attempts to defraud had stayed constant. There was a move towards away from purchaser solicitor fraud to vendor solicitor fraud, he added.

Mr Collins described CQS as a “good start” but said he was “a little disappointed at the level of membership” as there are thousands more law firms on the Lloyds panel than have the accreditation. Further, given the growth of licensed conveyancers and introduction of alternative business structures, CQS will never become the definitive standard, he added.

Mr Collins said lenders, as banks, should try and ensure as much as possible that money is passing between FSA-regulated businesses – it should not be the role of solicitors to transmit money. Lloyds may start with net lending in transactions where it is both redeeming the mortgage and providing the new one,but he predicted that it will be a “long road” to have such a scheme adopted across the industry.