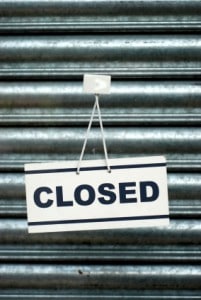 SHutting up shop: clients would be much better served by easy transfer of files and staff to acquiring firm

Rules governing law firms’ ability to acquire the case loads of failing firms should both be relaxed and made more certain for the benefit of the profession and clients, insolvency and legal experts have argued.

Joanne Wright, a partner at business rescue, recovery and restructuring specialists Begbies Traynor, claimed the system has caused “deadlock for thousands of innocent clients, while law firm staff are caught in the middle”.

Craig Jones, operations director at national law firm Simpson Millar, said the alternative to reform of the successor practice rules is “a legal services industry on its knees, a kitchen on fire and hundreds of clients caught left to burn”.

For several years the rules have been causing major problems for law firms which merge with, take over or even just recruit members of other firms which then go out of existence, lumping their liabilities onto the surviving practice, often unwittingly.

“The legal services industry is already struggling under financial pressure and the anticipated added competition from high street brands come 2011 will undoubtedly spell the end for even more firms,” Ms Wright said. “As they face insolvency, ongoing cases can be offered up for sale in an attempt to realise their value and pay back creditors. But the successor practice rules are now beginning to deter those very firms needed to carry the torch and selling the otherwise valuable work in progress is increasingly difficult – often now impossible [leaving clients in limbo].”

With professional indemnity premiums on the rise, the rules could also have a damaging impact on the acquiring firm’s next renewal, she said.

Ms Wright recounted one recent case where an insolvent practice with a portfolio of ongoing work was left with no other option than to write to its entire client list recommending a few other local firms with the message “choose your new lawyer”.

She said: “This was despite the fact that other local firms would gladly have taken on the files and cared for the clients, but were advised against it. Staff were made redundant on Christmas Eve. These rules have created an obstacle course for insolvency practitioners trying to realise any value left in failing law firms which would benefit clients and staff.”

The combination of the successor practice rules with TUPE are the main stumbling blocks as redundancy for staff may be the sensible business decision. “Files aren’t transferred smoothly during the process but are broken up. It makes sense for the principal handling the case to transfer along with the files, carrying over knowledge. Unfortunately, such a move almost automatically labels the new firm as the successor practice.”

Ms Wright proposed that firms interested in saving struggling practices should be exempted from the rules in certain circumstances. “Firms with plenty of time and money can do a thorough due diligence and risk assessment but in insolvency situations, there often isn’t enough time for such an exercise. Perhaps there should be a special provision for cases where only the files are transferred over – taking into account what’s best for everyone involved. Such a waiver would be hugely helpful for clients. Of course the liability then remains with the insurers.”

Mr Jones argued that it is the “innate uncertainty and absence of practically any precedents or useful guidance on when the acquiring practice will be treated as a successor practice which is deterring healthy firms from receiving the baton”. As such, he said, the acquiring practice is “at the mercy of a whole range of authorities with equally differing motives and stakeholders to serve”.

He explained: “The insurer of the ceasing practice will, of course, be looking to shift liability for any future notifications. It is my understanding that in the event of a dispute, the insurers will resolve it through arbitration into which the acquiring practice will have little input. The courts and the Legal Ombudsman could be asked to take a view on whether the acquiring practice is in fact a successor practice. Although it is still too early to determine the impact of the ombudsman in terms of dealing with complaints, it does present yet another opinion holder and decision-maker regarding these rules.”

Mr Jones said that while the objectives of the successor practice rules might be admirable, “surely it is more sensible to ensure that the rules are policed in such a way as to give greater certainty to those healthy practices looking to absorb work from failing practices?”

The SRA changed the successor practice rules last year so that a firm that is to cease by way of a succession will be able elect (before it closes) to trigger its own run‑off cover. This will be subject to the obligation to report the election to the SRA within seven days and of payment of the premium.