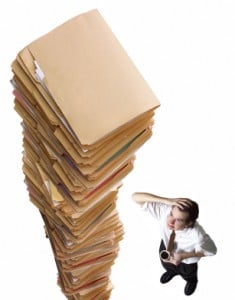 Overworked: influx of new files and new working practices can lead to mistakes

According to a recent report commissioned by the Legal Services Board, referral fees do not harm consumers (see story). Whilst one can question the efficacy of such findings (including the apparent bias of estate agent respondents and the small, and arguably non-representative, samples used), they were this week supported by a separate report (see story).

The Legal Services Consumer Panel found that referral fees neither increase costs nor reduce the quality of advice. This is, perhaps, surprising given the panel’s concerns that price, not quality, dictates who gets the work; clients are subjected to high-pressure sales techniques; non-disclosure is prevalent; and panels are restricted, mainly consisting of larger firms.

Consequently, the recommendations include greater transparency, written consent and enforcement action. Disclosure is already required pursuant to the Solicitors Code of Conduct, breaches of which can (and should) be enforced by the Solicitors Regulation Authority, so it is rather doubtful that the protection afforded to clients will be enhanced, unless, of course, the panel feels that the SRA is either unable or unwilling to perform its duties. If it is the latter, is this an example of what Law Society President Robert Heslett warned on Tuesday is the looming threat to the profession’s independence (see story)?

Similarly, the panel concedes that written consent is impractical in personal injury cases where much of the initial work is transacted over the telephone. The same argument can surely be applied in many other fields, especially with improved IT and “legal tourists” removing the geographical constraints that have hitherto existed. It is certainly somewhat difficult to accept at face value Vanilla Research’s claim that the recommendations are a “game changer”.

Regardless of whether or not these two reports prove determinative in the board’s final analysis, I believe there is a broader, and possibly more pressing, issue: are referral fees actually good for the profession itself? Should solicitors not retreat and regroup now before they become over-reliant on third parties for work? For what it is worth, my own view, as both a practising solicitor and law firm consultant, is that, irrespective of the ethical issues, paying referral fees to agencies can be self-defeating. Here’s why.

Yes, the volume of work may well increase, but what really matters is your bottom line and reputation/goodwill. Take A Firm & Co. They were a general high street practice undertaking both contentious and non-contentious work, largely for local clients, who had either used the firm before or had been recommended to do so. Advertising was fairly low key as a consequence. Most work was transacted face to face and “snail mail” was the norm. Work was handled by experienced solicitors with a good claims record. Support staff were experienced and had been with the firm for many years. Workload was, except for the usual peaks and troughs, more or less constant, as was turnover and profit.

However, the partners began noticing that they were losing conveyancing work. They discovered that local estate agents, who they regularly dealt with and instructed to carry out probate valuations, were directing erstwhile clients to other firms, usually out of town, and receiving a referral fee in return. A similar thing was happening in respect of personal injury work. Claims management and insurance companies were capturing clients at an early stage and referring them to panel solicitors, again willing to pay for the privilege.

Not wanting to get left behind, A Firm & Co entered into an arrangement with both a local estate agent and a claims management company. They paid the agent £200 per conveyancing file and £500 for each personal injury case (the reports highlighted that the fees can be as much as £400 and £800 respectively).

As a consequence, workload increased. New staff had to be taken on to cope and a new IT system (including a case management system) was installed, all at significant up-front cost to the practice, placing considerable strain on the firm’s cash flow. Indeed, borrowing was increased. Costs pressures dictated that the new employees were more junior/less experienced than those already at the firm, introducing a culture change and necessitating more training and supervision than before. Similarly, the solicitors increasingly delegated more work to the non-qualified staff, personal contact was lost and other service standards slipped.

Unfortunately, some mistakes were made, leading to a rise in the professional indemnity insurance premium, already swollen by the increased turnover and referral arrangements. Moreover, the arrangements had to be disclosed to clients, who questioned whether the firm was acting in their best interests. Dissatisfied clients made complaints, taking up yet more valuable time, and spread adverse publicity, damaging the reputation/goodwill that had taken years to build up. Eventually, the firm outgrew its town centre premises and relocated to an expensive open-plan office complex on the outskirts of town, alienating former clients still further. Staff turnover was much higher. I could go on, but you get the picture.

Ah, I hear you say, but what about the increased fee income? This made it all worth it right? Well, yes, turnover was up, but the referral fees had to be deducted from this. Even discounting the additional overheads and other burdens, the firm was, in effect, standing still, doing twice as much work for the same fees (similar to some legal aid firms, but without the element of public service).

Factor in the associated expenses and other negative effects and A Firm & Co. was, in fact, worse off. Nevertheless, they felt they had gone past the point of no return. They had invested so much in this new, “commoditised” business model, and were so reliant on the agents and claims companies, that they simply could not pull the plug. They were stuck with the situation they themselves had created and could not help feeling that the tail was wagging the dog.

You do not need me to tell you how much worse this situation will get if the agent and/or company squeeze the firm for even more money, the referrers go bust or close down, rules and regulations change or the markets slump. The same (or at least a very similar) scenario can be applied to third-party referral networks, who take a share of any profit costs, as well as charging an annual membership fee.

Build your own brand

So what is the alternative to the “if you can’t beat them, join them” mentality? Well, I firmly believe that A Firm & Co should have concentrated on building (not destroying) their own brand, rather than someone else’s. They were reliant on the agent and claims company to attract the client and then automatically refer the client to the firm. A Firm & Co’s own branding was, to a certain extent, irrelevant, as they were going to get the work anyway. Their referral fees were contributing to the third parties’ own advertising and marketing budgets. A Firm & Co both neglected its core clients and took no independent action to gain new ones.

I am in no way advocating that the firm should have continued with the same, staid “traditional” approach. As I have been at pains to stress elsewhere, law firms must adapt both their services and mode of delivery to compete with the new, more commercially minded entrants to the legal marketplace (so-called Tesco Law). A Firm & Co could, for example, have developed an interactive website to both serve existing clients and attract new business. IT could still have streamlined processes and helped improve communication, transparency and access to information.

They could even have gone further and created a “virtual” office, engaging self-employed consultants and slashing operating costs in the process. Both old and new media could have been utilised to improve the firm’s exposure. Standard tasks could still have been delegated to paralegals. The firm could have become more specialist, differentiating itself from rival firms and charging a premium based on its unique selling proposition. Perhaps a merger with a compatible firm to achieve economies of scale was the way forward.

Believe it or not, I also support referrals, but to and from fellow solicitors. A Firm & Co could have referred work that it did not carry out to another firm, perhaps as part of a reciprocal arrangement or in return for a fee or share of any profit. It could also have sought work from another firm. Such arrangements, which do not necessarily have to be disclosed, re-seize the initiative, help solicitors retain control over their own destiny and keep referral fees within the profession. Over-reliance should not be an issue either if the firm has also adopted some of the practices outlined in the preceding paragraph. The firm will always have its (enhanced) brand to fall back on.

Yes, similar growing pains and teething problems would have been encountered, but they could have been controlled, managed and smoothed over more easily. If necessary, more regard could have been had to the needs of those existing clients still craving a local, high street solicitor providing a bespoke, personal service, whilst at the same time reaching out to more IT savvy, less centric potential clients where speed, ease of use and price are king. Different levels and types of service could have been offered to accommodate both. Crucially, the firm’s bottom line should have improved and its medium-to-long-term future placed on a much firmer footing.

I do not want to scaremonger and I appreciate that all firms are different. A combination of solicitor referrals, other referrals and updated practices and procedures may well be the answer for some, but if, as seems to be the case, third-party referral fees are here to stay, each individual practice must carefully consider all of the alternatives and decide what is best for them. Blindly following the crowd may not be all it is cracked up to be.