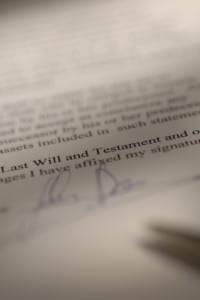 Three companies involved in the provision of will and trusts were wound up in the High Court last week, following an investigation by Company Investigations, part of the Insolvency Service.

Minster Legal Services (UK) Limited and Legal Assistance Limited – both based in Gainsborough, Lincolnshire – and Legal Assistance 4 U Limited trading from Newark, Nottinghamshire, operated nationwide using telesales staff to cold-call consumers to persuade them to accept a home visit from a self-employed ‘legal consultant’ who would then promote the companies’ products.

As we , the Official Receiver was appointed as provisional liquidator of the three companies, and winding-up orders were made on 20 October 2011.

According to the Insolvency Service, the investigation found that Minster Legal Services (UK) Limited operated using a deliberate lack of transparency in order to disguise the controllers of the business, that a disqualified director acted in the management of the company as though he were a director; that company funds were diverted into a bank account over which the company had no control, that the company failed to maintain adequate financial and accounting records; and that it traded in a manner which was misleading and contrary to the public interest.

The investigation also found that clients of the company were charged significantly different prices for substantially the same product without any adequate reason for doing so, that there were significant delays in the administration of clients’ affairs, that some clients were sold products which were inappropriate for their circumstances, and the official order used by the company failed to provide the necessary detail regarding a client’s right to cancel their agreement. The company was also found to be insolvent.

In relation to Legal Assistance Limited, the investigation found that the company had been used to continue the business of Minster Legal Services (UK) Limited and continue the mischief. The company also failed to make refunds to clients in a timely manner and provided unfounded explanations to clients for not having done so. The investigators also found evidence of the disqualified director removing company documents from the company’s trading premises.

The investigation found that Legal Assistance 4U Limited was principally a telesales operation being run on behalf of Legal Assistance Limited, and thus linked to the “objectionable trading activities” of that company, the Insolvency Service said.

Together the three companies acquired sales income of over £1.1 million.

The Legal Services Board is currently investigating whether to make will-writing, probate and the administration of estates regulated activities.