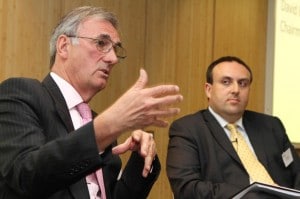 Edmonds: referral fees have opened up access to justice

Meanwhile, speaking in a platform interview with Legal Futures Editor, Neil Rose, Mr Edmonds acknowledged publicly for the first time that he was mistaken when in November he agreed with the proposition that the Bar Standards Board (BSB) should be sole regulator of advocates. “I got that wrong,” he said.

Also, he revealed the LSB will announce a definitive position on referral fees within “a couple of months”. He stated he believed referral fees had opened up access to justice and admitted the board was finding it hard to steer a course between the pros and cons of the practice.

Responding to recent criticisms by the Bar Council chairman, Peter Lodder, that the LSB had slipped into “micro-management” of the approved regulators, Mr Edmonds denied the LSB was engaging in “regulatory mission creep”. The LSB has “a perfect and absolute right to try and move things on more quickly” when it perceives intervention is necessary, he insisted.

Questioned on the specific charge that the board was becoming too prescriptive in detailing the minutiae of diversity monitoring, he cited the LSB’s obligation under the Legal Services Act 2007 – a well-thumbed copy of which he held during the interview – to promote diversity in the profession as his authority to intervene.

He pointed out that in the three years the LSB has been in existence, he “has never criticised the approved regulators” in public. “Regulators slamming the people they regulate is not productive,” he said, adding: “I slightly regret it when I see public remarks the other way, but c’est la vie.”

Mr Edmonds – whose term of office has just been renewed for another three years – would not be drawn on his views on the effectiveness of the competitive regulatory system, saying only that he supported the notion that an alternative business structure (ABS) should be able to choose a regulator most suited to its business model. But he did not approve of regulators competing for business, he said.

He was confident that ABSs would enhance access to justice, which under the current system is “a bit of a myth” for many people. He anticipated that within two or three years “there will be a very significant build-up of the provision of legal services from what we see now” that will be “hugely to the benefit of the consumer”.

Asked whether the LSB should follow the BSB’s lead and speak out in the public interest against the access to justice implications of legal aid cuts, Mr Edmonds said it should not.

Summing up the first three years of its operation, Mr Edmonds said the LSB had achieved its objectives in preparations for ABSs; in establishing the Legal Ombudsman, which is “working very effectively”; and has helped to create a “proper split” between representative and regulatory functions within the main branches of the profession.

He denied the board had moved slowly on its anticipated general review of the issue of reserved activities, in particular will-writing, on which , saying: “I think we need to look very carefully at the implications of ‘rushing’ into action into areas that are as sensitive as, for example, will-writing. We are a regulator that operates on the basis of evidence, analysis and discussion.”

Referral fees were also “an incredibly difficult” and “complex” area on which to reach a decision, he said. On the one hand “access to justice has been enhanced by the fact that there is a referral fees mechanism”. But on the other, a decision has to ensure other effects, such as a drain on the public purse or pressure on private people to settle, are taken into account, he said.

Asked whether the LSB should continue in its present form after October – with the three main elements of its work completed – Mr Edmonds said it would be needed to ensure the framework for ABSs remains fit for purpose. Also, “there’s a whole raft of basic technical things that we do in terms of approving rule changes”, along with work in other areas such as education and training, the quality of advocacy, referral fees and diversity, he said.

The LSB delivers good value for money, he suggested: “We’re not some monster regulatory agency; just 32 men and women working out of one office. I think were pretty darn cheap, actually.”