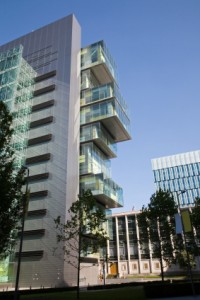 Manchester Civil Justice Centre: judge said bank and agency had not given proper thought to the law

A judge has criticised a Manchester debt collection agency and the bank instructing it for conducting litigation in breach of the Legal Services Act 2007, after pursuing an investigation on his own initiative.

Judge Richard Holman’s county court judgment in Bank of Scotland plc v Mark Whiteside – a routine mortgage debt case – is an indication that the lower reaches of the judiciary will hold firm on the line between reserved and unreserved activities once alternative business structures come in this October.

Judge Holman, who is the designated civil judge for Manchester, discovered the debt collectors, Henderson Booth and Snell Ltd (HBS), had been issuing proceedings, and entering and enforcing judgments on behalf of Bank of Scotland (BOS).

He rejected HBS’s assertion that its role was merely administrative as “fundamentally wrong” and refused to grant the company litigation rights in the case.

Judge Holman was alerted to the unauthorised activity when he saw HBS’s name on the claim form as that of the claimant’s solicitors, with the company’s address given as the service address. Although an HBS director had crossed out “claimant’s solicitor” and wrote in “litigation friend” under her signature – and told the court there was no intention to mislead – “it requires no mental gymnastics to appreciate that some recipients will interpret this as indicating that HBS are solicitors”, the judge said.

Neither HBS nor BOS – which during the case acknowledged that HBS worked as a debt recovery agent on its behalf “for all matters until it becomes a defended action” – had given “proper thought” to “well-established laws passed by Parliament”, said the judge.

He added: “The information provided clearly shows that HBS is, and has been, undertaking these activities on a regular and widespread basis. There would appear, therefore, to have been a wholesale disregard for the provisions of [the 2007 Act].”

He directed that his judgment be sent to other designated civil judges and to the Attorney-General, the Legal Services Board, the chief executive of Lloyds Banking Group, which owns BOS, and to the Financial Services Authority.

An HBS partner, Michael Snell, said the company had no comment to make on the judgment.

A BOS spokesperson said: “The group has co-operated fully throughout this process. Following the judgment, we took immediate steps to review all of our procedures for both existing and new cases.”