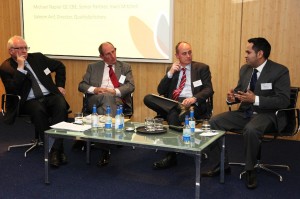 Meanwhile, speaking on the same platform, Law Society chief executive Des Hudson questioned QS’s use of the word “quality” in the brand. He said: “One of the things we are concerned about is, is it appropriate that [the QS] firms choose to take ownership of the epithet ‘quality solicitor’? What about the other 9,870 firms?”

Mr Arif, a co-founder of QS, said the number of rebranded firms now stood at 170 and the target was for it to rise to 300 by October. The company’s recent deal with WHSmith would help QS “cover pretty much every high street, train station, airport and service station with both literature and representatives”, he said.

He would not name names, but suggested one firm would fail to meet QS’s minimum standards at an annual assessment next month, a year after the first tranche of firms joined up, adding: “If a firm is not up to standard they will be ejected and firms know that.” Explaining, he said: “Firms will be ejected if they have any serious disciplinary or financial problem.”

Earlier Mr Arif commented that after alternative business structures are allowed in October, he expected new entrants to the market to focus on price. “To try and compete with those large brands on price would be a bad mistake for the vast majority of firms who don’t have the cost base and aren’t able to compete with a volume player,” he said.

He admitted there was no way to guarantee the quality of advice given by QS members, but pointed to the fact that every QS firm had to have Lexcel accreditation or commit to having it within 12 months before it could be considered for membership. Also, firms had to have a “clean” regulatory record and provide testimonials from clients.

The question of the criteria used to vet QS firms arose recently when a Hull solicitors’ firm complained to the Advertising Standards Authority over the issue of QS using client feedback in its selection process. The claim was not upheld.

Mr Arif said QS firms were assessed on a “continuous basis” by an ex-Lexcel assessor “going around providing support and advice and ensuring each of our firms is up to scratch”. Customer feedback was also sought on any case referred to a QS member firm from the company’s call centre, he said.

Mr Hudson defended the Law Society’s record on promoting the brand awareness of the solicitors’ profession and highlighted both Lexcel and the Conveyancing Quality Scheme. The profession “needs to invest long term in promoting these brands and standards as something the public recognise”, he said.

The society’s target is to produce an equivalent brand awareness in the delivery of legal services to the Gas Safe register (formerly CORGI) in the gas heating industry, Mr Hudson said. It had to achieve this “with all the power the Law Society can muster”.

Earlier in the day, Council for Licensed Conveyancers chairwoman Anna Bradley said the CQS would bring solicitors up to the standards already met by licensed conveyancers.

Asked whether firms should be allowed to use the Law Society crest on its notepaper and web sites for marketing advantage, Mr Hudson had reservations. The society had to consider the damage that would be done to the brand if it was associated with firms “involved in a public scandal”. At the moment the plan was to use the brand in the context of endorsing accreditation, in order to maintain control over how it was used, he said.