Lawyers “markedly” worse at business development than other professionals 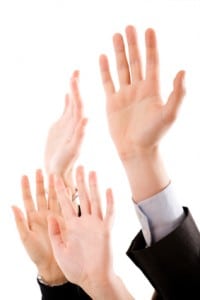 Hands up: only 58% of lawyers who should be doing BD actually are

Law firms are “markedly” worse at business development and client management than other professional services practices, research has found.

The study also revealed that just 58% of lawyers who should be involved in business development at their firms actually are, far lower than accountancy, engineering and property professionals.

The survey by business development specialist PACE Partners, which looked at what processes were in place and how effective they were across the four disciplines, said that just a fifth of those lawyers who were supposed to be involved in business development were perceived as either good or excellent at it, compared to half of accountants.

Although law firms considered business development to be very important, their performance was lower than all other disciplines. For example, while 80% of fee-earners at law firms were meant to be involved in business development, PACE discovered that just 46% of them are. Key client management was seen by lawyers as a particular weakness, although they thought their strengths included targeting and developing new clients, client service/client care processes, and bid/proposal processes.

PACE founder Paul Denvir, author of the report, said he was not surprised by the results: “Law firms started focusing on their business development only relatively recently and have spent far less time doing it than other businesses.” He indentified “a greater sense of individuality” among fee-earners as a particular problem for law firms.

Mr Denvir said that businesses generally improved by focusing their efforts into managing business development and supporting the individual. He added that word of mouth and the help of partners and peers were also necessary to help a firm evolve.

The research found that firms which have implemented business development processes describe “significant benefits”. But in order to do so, firms have had to overcome a range of barriers, including unwillingness to change, complex structures with a number of disparate practice areas, lack of time and other resources, lack of strong management and leadership, and a lack of skills in fee-earners and/or the business development team.

It added: “The experience of the respondents makes it clear that the secrets of success in overcoming these barriers include strong, supportive, committed leadership by senior management, a small number of influential champions, robust leadership of the implementation of the new processes, a focus on maintaining momentum and commitment, strong leadership of and by the BD team and training. Interestingly five of those six ‘secrets of success’ involve leadership.”