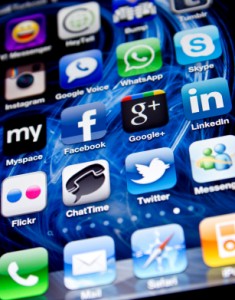 Social media: firms should consider investing more time and effort engaging with clients and contacts rather than simply making announcements

Bigger law firms are embracing social media but then failing to engage in two-way communications through it, new research has found.

The survey for RTS Media, which polled 50 marketing managers at mainly larger practices, found that nearly half of the firms prohibited staff from accessing social networks from work IT equipment – even though clients were keen to interact with staff that way.

It said that 76% of the firms use social media, with a further 15% planning to.

LinkedIn is the most popular platform, with 40% of firms using it followed by 34% using Twitter and 20% on Facebook.

Most saw social media as a broadcast tool. Asked about the best use for social media, 45% said announcing firm news, 19% said to express opinions or make statements about news and issues, and 13% highlighted marketing products and services. A small number (7%) thought its primary value was in making their firm look modern. No one plumped for monitoring the competition as their answer.

Just 13% saw social media’s key purpose as “chatting with other people/organisations/customers”, but there was evidence that clients wanted to communicate via different social media, particularly using the LinkedIn profile of staff members and sending direct messages via Twitter.

The marketing managers said convincing management and senior partners of the value of social media was difficult, as was finding the time to do it and building a substantial following. Some 70% allocated no more than half an hour a day to managing the firm’s social media presence.

Ralph Savage, managing director of RTS Media, said: “There’s no disputing the popularity of having a presence on networks like Twitter and LinkedIn, but given the results of this survey perhaps law firms should consider investing more time and effort engaging with clients and contacts rather than simply making announcements.”

The survey found that clients contacted 47% of respondents through Linkedin, and 29% said that customers would send their firm direct messages through their corporate Twitter account. “More people are moving towards new media channels and want to interact with law firms online,” he said.

He said that firms must be willing to invest time and resources if they are serious about building and maintaining an online presence. “This could mean training a small group of Twitter ambassadors who can monitor traffic throughout the day using software such as Tweetdeck or Hootsuite, share interesting content and engage with followers in line with the firm’s overall communications strategy.”