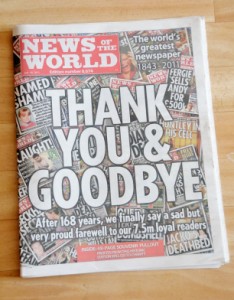 A high-profile solicitor whose phone was hacked by the News of the World has expressed his concern that the news has become public before he had a chance to identify which clients may have been affected.

The Metropolitan Police has confirmed to Mark Stephens, the well-known media lawyer at London firm Finers Stephens Innocent, that his phone was hacked, but he has yet to have a meeting with officers from Operation Weeting to find out the details.

“I’m troubled that this has come out at this stage,” he told Legal Futures. “I would have preferred it to have come out after the meeting so that I could have spoken to the [affected] clients first.” He said he did not know how the story came to be in the public domain.

Mr Stephens said he has long since stopped using his mobile phone answerphone.

Two months ago it emerged that Graham Shear, a partner at City firm Berwin Leighton Paisner and solicitor to several celebrities – most notably footballer Ashley Cole – had joined the list of those suing News International over having his phone hacked. Last week the solicitor tweeted that he had received full disclosure from the police on what information they had following a court order.

Meanwhile, Law Society chief executive Des Hudson has written to Lord Justice Leveson asking him to consider the hacking of solicitors’ phones as part of his inquiry into the phone hacking affair.

In his letter, Mr Hudson said: “Quite aside from the breach of privacy for both solicitors and their clients that this would have entailed if shown to be true, the suggestion that the information was gathered specifically to undermine their legal claims against the newspaper introduces new questions about how the practice of phone hacking was used.

“Specifically, if hacking was carried out with the intention of undermining court action, it could constitute an attempt to pervert the course of justice, the seriousness of which I know you will appreciate.

“We consider that this issue is of such importance as to merit specific consideration by the inquiry, and we would be grateful for your views on this.”

Last week Mr Hudson expressed outrage after hearing from members of the legal profession who police had notified about possible criminal activity. Mr Stephens confirmed that he had notified the society.

Mr Hudson has also written in similar terms to the Metropolitan Police asking that the issue be specifically investigated because of what appear to have been breaches of the criminal law.