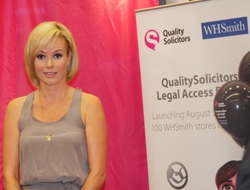 Holden: words were her own, says QS chief

A chorus of complaints about comments made on ITV’s This Morning by Amanda Holden when promoting QualitySolicitors (QS) led to a clarification being broadcast on Friday.

In an interview the week before, Ms Holden described QS firms as “solicitors who are kosher, who are not going to rip you off”, and wrongly suggested the brand had Law Society approval by saying member firms had been chosen by the “governing body for solicitors”.

Solicitors posting in various online forums were particularly incensed by what they saw as the implication that non-QS firms would rip consumers off, with some contributors vitriolic in their criticism of QS.

The Law Society asked QS to seek a correction. Director of communications Stephen Ward said: “We took that step because we believed that elements of her remarks were detrimental to the solicitor brand and might have given the impression that the Law Society was somehow involved in the scheme.”

As a result, a This Morning presenter told viewers: “Now you may remember Amanda Holden appeared on This Morning last week, talking about her role in the musical Shrek and Britain’s Got Talent, and she also mentioned her involvement with legal services brand QualitySolicitors.

“They have asked us to clarify that the Law Society plays no role in the selection of solicitors’ firms that join their group, and Amanda’s light-hearted comment that their members ‘won’t rip you off’ was not intended to imply that other solicitor firms would do so. All solicitors are regulated to provide consumer protection.”

QS chief executive Craig Holt told Legal Futures that while Ms Holden chose her own words – and any criticism of non-members was ambiguous at best – “we were genuinely keen to ensure they were clarified”.

However, he added that the reaction to Ms Holden’s comments is “interesting and enlightening in its own right”, and that many solicitors were missing the real point.

He explained: “I think the reaction betrays the profession’s fragility and lack of confidence in their public image – and that was the source of some of the vitriol. Frankly, firms would be better spending time on working out how to overcome these negative public perceptions than worrying about Amanda Holden repeating them.

“She said those things because those are her perceptions. She is not alone. Do law firms think the ‘non-law firm’ new entrants will shy away from taking advantage of those perceptions? No chance. They will happily suggest law firms are expensive, unfriendly places, full of hidden costs and grumpy lawyers ready to make you feel stupid. Firms better be ready to deal with that positively rather than just complaining about it.”

Some solicitors have called on the Solicitors Regulation Authority to investigate a possible breach of the publicity rules, but Mr Holt said he had received no contact from the authority, nor did he expect any as Ms Holden was being interviewed in her personal capacity and QS had no control over what she said.