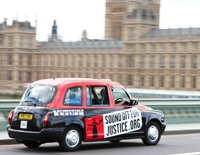 Campaign: three Sound Off For Justice taxis will tour London for the next week

Legislation to implement the legal aid and the Jackson reforms will be introduced to Parliament in the next few weeks, it has emerged.

The Ministry of Justice’s (MoJ) updated 2011-15 business plan, published on Friday, says legislation will be introduced in June.

The business plan confirms the MoJ’s intention to press ahead with the legal aid reforms, even though it has not yet issued a response to last year’s green paper consultation.

The business plan says this too should be published in June, although it is believed Lord Chancellor Ken Clarke may make a statement on legal aid reform to Parliament this week, while there is also a House of Lords debate on legal aid on Thursday.

As a result, the Law Society will step up its “Sound Off For Justice” campaign against the legal aid reforms, having transformed three London black cabs into mobile “sound-off” booths equipped with Apple iPads and iPhones.

These will allow Londoners to voice their opinions about the government’s plans by signing the campaign’s online petition or joining its unique voicemail protest.

A “concierge” will accompany all the cabs to help passengers use the equipment. They will be on the road for a week.

Separate from the Jackson reforms, the MoJ is currently consulting on extending the road traffic claims process to cover all personal injury and clinical negligence claims up to £25,000. The business plan says a report on the outcome of this consultation will be published by October.

October 2012 is looking like the most likely date for implementation of the civil costs reforms.

However, later this week a joint conference of the Claims Standards Council and the Access to Justice Action Group – to be chaired by Legal Futures Editor Neil Rose – will seek to rally support for continued lobbying against the Jackson reforms as they enter Parliament.

Also the All-Party Parliamentary Group for Legal and Constitutional Affairs will host both Lord Justice Jackson and Professor Ken Oliphant – who oversaw an academic group which shredded the judge’s report – in a debate on the reforms.