QualitySolicitors to be in 1,000 locations by end of year as Holt warns the future is brands 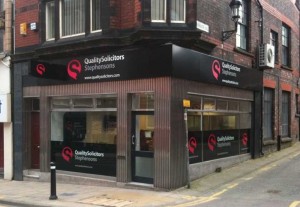 QualitySolicitors (QS) aims to be in nearly 1,000 locations across England and Wales by the end of the year as a result of expansion and its tie-up with WH Smith, chief executive Craig Holt has said.

Mr Holt said the network covers 170 locations, with 30 more contracted to open in the next couple of months and with the number of law firms reaching “4-500 by the end of the year”.

Each firm will have at least one corresponding location in a WH Smith store, giving QS “a branch presence” – including the WH Smith concessions – in nearly 1,000 locations”, he said in an interview broadcast on the Gazette website.

Mr Holt said there are no referral fees in the WH Smith deal; the local QS firm is paying a flat rate rental of space based on footfall. He described WH Smith as having “the best real estate” of any brand in the country.

He also said the network is now self-financing, having had initial investment to start up. There are no plans to become an alternative business structure, with the focus instead on building a 25-30% market share, Mr Holt said.

The future of the legal market is brands, the barrister insisted.

He hit back at concerns expressed by Law Society chief executive Des Hudson at last month’s Legal Futures Conference about QS appropriating the term ‘quality’. He said: “I have no qualms about appropriating that term for our brand. I do believe our firms provide a high quality of service. It doesn’t mean other firms don’t.”

Concerns about the name are only raised by lawyers, and not consumers, he added.

Mr Holt said client feedback allowed QS to identify if firms are falling below the average standards across the group and provide the training to bring them up to scratch, with the ultimate sanction of losing the branding.

“We very much make the point to the public that we’re detached and removed from our firms. We provide the branding and we monitor them, and firms which don’t provide a service as good as others will lose that branding.”

He confirmed the story that emerged at the Legal Futures Conference that one firm is to be ejected for not meeting the network’s standards but would not go into further detail.

Mr Holt warned firms that they would be making a “grave mistake” if they try to compete just on price. Such firms will be in for “a very significant shock indeed post October when the big volume providers, who will dwarf the size of the current volume providers, come into the market and provide services at a cost that is almost unimaginable now”.

He argued that consumers will pay for good service, which he said is not generally available in the legal market at the moment.