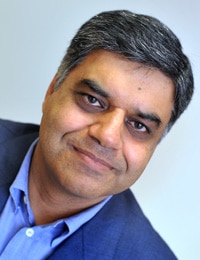 Ahmed: focus on servicing clients on the spot

A Yorkshire law firm is joining forces with the founder of Freeserve to launch the first of a planned national network of city centre law shops under the brand Legal365, we can reveal.

Last Cawthra Feather and entrepreneur Ajaz Ahmed – who have initially set up Legal365 as an online venture providing automated document assembly – are to form an alternative business structure (ABS) that could seek external investment if needed to further their ambitions.

The first shop will be in Leeds and seek to service clients immediately from the premises by having lawyers on hand to help fill out fixed-fee legal documents they have purchased. “We want to focus on services that can be completed right away in front of them,” explained Mr Ahmed.

Clients with more complicated problems will be referred back to the firm, which has offices in Leeds, Bradford, Ilkley and Shipley.

Last Cawthra managing partner Simon Stell said that as Legal365 develops, the shops may become full-service branches. “A store selling legal documents in a face-to-face way will generate interest and easy access to legal services,” he predicted. “We’re trying to break down the barrier between clients and lawyers.”

The pilot will run for up to six months “to get the model right”, Mr Ahmed said, after which they will roll the concept out nationally. Mr Stell said they would look to build relationships with firms in other areas to service those clients whose work cannot be handled in-store; Legal365 could even become a franchise.

Mr Ahmed distinguished it from what QualitySolicitors is doing with its WHSmith Legal Access Points – which he applauded for raising the profile of law firms – as the aim of Legal365 is to provide advice on the spot, rather than just arranging appointments at another location.

Legal365.com is powered by Epoq Legal (which in 1999 made great waves by partnering with Freeserve to offer its Desktop Lawyer service). Mr Ahmed said they were trying to use the software differently than some others by ditching legal jargon and giving away some documents for free.

Last Cawthra Feather has recently done a deal with the Forum for Private Business to offer the Legal365.com service through its website.

Mr Stell said the firm realised over two years ago that the way it delivered private client services had to change in the face of potential new entrants to the market. He said they partnered with Mr Ahmed for his experience of retailing and help in fine-tuning Legal365 to build a consumer brand.

At the same time, the commercial practice continues to grow under the Last Cawthra Feather brand, he added.