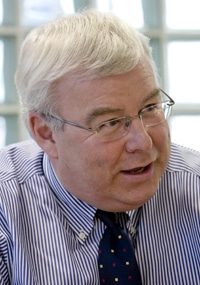 Connell: the financial position of some law firms may be more precarious than widely thought

Turcan Connell has signalled its intention to become one of the first alternative business structures (ABSs) in Scotland, while its joint senior partner has called for law firms to be subject to capital adequacy requirements.

Douglas Connell said the introduction of ABSs – which will be called licensed providers in Scotland – provides a “once-in-a-lifetime opportunity” for lawyers.

The Scottish legislation requires licensed providers to have majority lawyer ownership; the regime should be introduced later next year, after ABSs have begun in England and Wales.

Turcan Connell is a specialist private client practice which spun off from Dundas & Wilson in 1997 and offers a wide range of ancillary services, such as investment management, financial planning, accounting and taxation – it also runs a family office for around 30 families.

Mr Connell said ABSs will “remove the concrete ceiling for senior colleagues who have been contributing to the business”; some non-lawyer members of staff have been given an “absolute commitment” that they will become partners.

He added: “Once we have the ABS in place, the idea of strategic partnerships with other parties interested in the inter-disciplinary model is something we would entertain.” The direction of travel, the solicitor said, was a group structure with the ABS at the top. “At core this is a law firm and it will continue to be a law firm.”

Though there are no plans to seek external investment, Mr Connell said “it is likely that requirements of capital adequacy for law firms will be increasingly on the agenda”, a move he said he supported – as Turcan Connell is also regulated by the Financial Services Authority and the Guernsey Financial Services Commission, the firm already has to meet such demands.

Citing the collapse of Halliwells, he said the “financial position of some law firms may be more precarious than widely thought”, with high gearing and off-balance sheet borrowing by partners not taken into account.

Mr Connell expressed surprise that so few firms seemed to be embracing the possibilities of ABSs and “at the hostility towards inter-disciplinary services”.