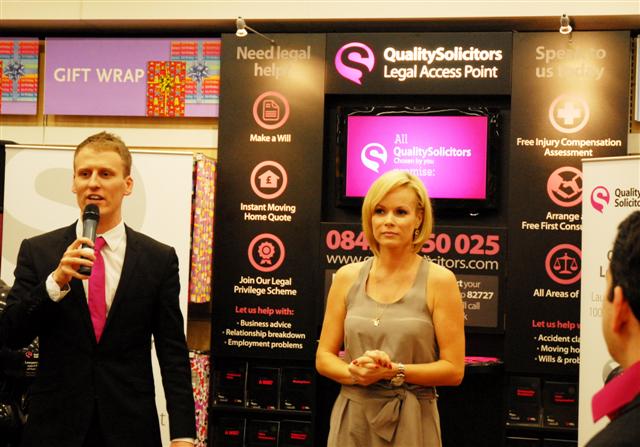 Britain’s Got Talent judge Amanda Holden unveiled the first of an eventual 500 nationwide LAPs at Westfield shopping centre in west London, before a crowd of onlookers and autograph hunters.

Earlier in the day Ms Holden appeared on ITV1’s This Morning programme and among other things described the QS/WHSmith tie-up in glowing – if confused – terms.

She told the presenters: “You can walk into WHSmith… there is a list that is now recommended by the public, for the public, of solicitors who are kosher, who are not going to rip you off and who can help you. And it’s completely free, you get advice free and then you can get any information you need.”

Asked who drew up the list of solicitors, Ms Holden appeared to suggest QS had official Law Society backing when she said: “There’s a governing body for solicitors and what they’ve done is they’ve gone to each town, they’ve picked the best solicitor from each town so there’s not a whole load of them and they’ve done a survey, they’ve contacted the clients… listened to the feedback, picked the cream of the crop and put them on that QualitySolicitors list.”

She also suggested QS was a better option than recommendation, saying that a law firm that had handled a divorce for a friend may not be the best firm to do your home move.

The fixed LAPs consist of a built-in TV screen and a series of targeted brochures covering matters such as moving home, problems at work, wills, injury compensation, and relationship breakdown.

During shop hours the stands will be manned by uniformed staff, who will be able to book appointments, provide conveyancing quotes, sell wills packages and fixed-fee advice sessions, and sign up people to the QS loyalty card scheme, called Legal Privilege.

In the event that staff cannot be present, a telephone hotline will connect potential customers to an operator.

Speaking at the launch to Legal Futures, QS chief executive Craig Holt pointed out that WHSmith was the second most visited retailer in the UK and it provided the network with a vital high street presence. “This gives us the thing that the brands like Tesco had over us,” he said.

Addressing concerns that members of the public would insist on launching into the details of their legal problems, Mr Holt said this had not proved to be the case during trials of the LAPs.

“Most people were very cognisant of the circumstances they were in. In two weeks of a trial we didn’t have anyone who went beyond saying ‘I do need a lawyer, can you make an appointment for me’, he said, adding that staff had been trained to explain clearly that they were not themselves lawyers.