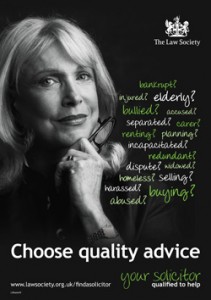 Recognition of the QualitySolicitors (QS) brand is registering low among consumers, Law Society research has found, which it says justifies its efforts to ensure the network does not appropriate the word ‘quality’.

A report to the society’s membership board yesterday said an opinion poll it commissioned found that QS has not made “anywhere near the necessary impact on the public consciousness to ‘own’ the word ‘quality’ and we need to make sure that they do not”.

Some solicitors have complained about QS’s use of the word, arguing that it implies non-members are not providing quality advice.

The society has this month launched an advertising campaign with the tagline “Choose quality advice”, which some solicitors feel inadvertently promotes QS. However, the report confirmed that the word ‘quality’ was used deliberately “to make it more difficult for [QS] to take ownership of it for their members when it accurately applies to the profession as a whole”. It said this thinking was supported by the GfK research.

All other legal brands tested in the survey received low levels of unprompted awareness, which the report said is “likely to be due to the fact that the use of legal services is for most people fairly infrequent and often a distress purchase. In other words, consumers aren’t generally keeping a look out for legal brands unless they have a current need for legal advice”.

QS chief executive Craig Holt wished the Law Society “the very best of success with their forthcoming campaign, which will coincide with our own new multi-million pound autumn TV, press and outdoor campaign”.

He said that in promoting the use of solicitors, their pair’s goals are aligned. However, he said the focus on the word ‘quality’ is “an interesting choice of emphasis”, as quality is not a concern the public has about using a solicitor.

He added: “Nor is this approach necessary, as appears to be felt, to counter QualitySolicitors’ own advertising or perceived ‘appropriation’ of the word. The public are well able to distinguish between a brand and an adjective and it is a non sequitur to believe the public assume that the existence of QualitySolicitors, the brand, somehow means other law firms aren’t also capable of being high quality.

“In that sense, I would worry that the Law Society are trying to address a problem that doesn’t actually exist.”

Mr Holt – who has not seen the methodology or full findings of the research – said 11% awareness is “actually a quite strong brand showing in the legal market”, while other studies showed much higher results for QS as the most well-known non-personal injury legal brand.

In any case, as the initial focus has been on creating the QS network, “we wouldn’t claim that we have already achieved widespread public awareness”, he continued. “Our brand awareness is now increasing rapidly and will go up considerably further following our forthcoming ad campaign, in conjunction with our highly visible WHSmith partnership and planned new branch launches.”

Mr Holt argued that the lack of penetration of legal brands is not the infrequency of purchase – “many infrequent purchases have strong brands” – but the fragmentation of the market.

“This absence of brands will not last and establishing a well-known one is the single greatest opportunity looking to the future of the legal market,” he said.