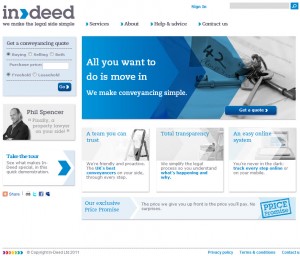 In-deed: should the Law Society be doing this, asks Hudson?

In-deed, the new online conveyancing business, could use the cash it raises from an AIM listing to inject capital into its panel law firms, it has emerged.

The company hopes to float next month, with a market capitalisation projected at around £9m.

Managing director Peter Gordon, a former 3i partner, said there was a significant surplus of demand for its shares, which he attributed in part to having a credible team and “investors intuitively thinking that what we’re doing is a good idea”.

He indicated that much of the money raised would be put towards marketing – though property portals are currently In-deed’s main route to market, it was also looking at television advertising in time.

However, once alternative business structures come into being in October, it could also be used to help panel firms that need to invest in training, technology and customer service to increase the volume of cases they handle and also ensure they match up to meet In-deed’s requirements – founder Harry Hill has said the company will be “ruthless in dropping any firm that doesn’t comply with our high service standards”.

“If the best way [for the firms to access capital] is for us to invest, we’d be delighted to do so,” said Mr Gordon.

He emphasised, however, that In-deed would only look to take a minority stake – owning a law firm is not on the company’s agenda at the moment.

Mr Gordon added that there had already been “quite positive discussions” about this with the panel firms currently on board.

Mr Hill has waded into a debate on his new service on the Gazette’s website, arguing that In-deed “will have considerable fire power as a listed company to attract customers to its transparent product offering… market research suggests that a high percentage of clients are not happy with the service that they currently receive.”

He predicted that unless conveyancers stop competing simply on price, “at least half will go out of business during the next five years”.

Law Society chief executive Des Hudson also posted a comment in the debate, saying In-deed raised the question of whether “we really another service farming clients and selling them back to solicitors”.

He argued: “Solicitors and certainly I think CQS [Conveyancing Quality Scheme] solicitors do deliver a consumer friendly, transparent conveyancing service… Should not the next phase of CQS be to do precisely what In-deed is proposing and more?”