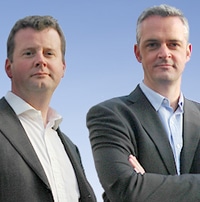 Another new franchise will start targeting law firms next week under the brand ‘Simplify the Law’, Legal Futures can reveal.

Simplify the Law’s first major milestone is to create a national network of law firms with a combined turnover of £200m.

It is pitching to practices of two to 20 partners, with turnovers from both private client and commercial work of £2m-10m. The company behind the brand, Evident Legal, has identified 440 firms which may fit with the franchise’s criteria and will begin contacting them next week.

The key message is that Simplify the Law can help firms punch above their weight in the fight against “brand-savvy big hitters”.

Co-founder Jonathan Brewer, a former City lawyer and senior LexisNexis executive, said Simplify the Law would use the quality of client service to differentiate itself from other law firms, with a strong focus on client communication. Clear and proactive communication will be the difference between success and failure for law firms, he argued, and will persuade consumers to use them rather than online legal services.

“The time for introspection is over and someone needs to start thinking about the service to the end consumer,” he said.

The aim is to target those in the ABC1 socio-economic group, both as individuals and business owners, because research shows that they are the biggest consumer purchasers of legal services and value reputation, expertise, speed and proximity over price.

The Simplify the Law logo

Mr Brewer said there are three key elements to the franchise offering, for which firms will pay a percentage of turnover: the brand and supporting advertising; lead generation, which he emphasised would include direct marketing and not just search engine optimisation; and an “operating support service” to help firms drive down costs, such as through group buying and new technology.

He insisted that while other law firm brands offered two of these elements, none offer all three.

Mr Brewer set up Evident – which is self-funded – with IT specialist Jean-Paul Camelbeek, who led the automation of legal services for a major bank.