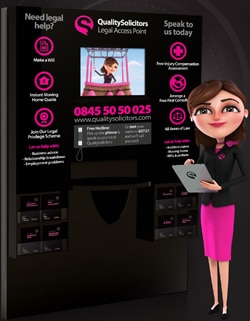 Legal Access Point: how the stand and staff will look

QualitySolicitors’ (QS) tie-up with WHSmith goes live next week, with “Legal Access Points” (LAPs) going in 130 stores in the first wave, we can reveal – along with first sight of how they will look.

Dozens more law firms are set to join the network this autumn, hand in hand with their LAPs in local branches of the retailer.

Britain’s Got Talent judge Amanda Holden will launch the new service at Westfields shopping centre in west London a week today, and will also feature in new television adverts promoting the WHSmith link that will start screening in September.

The first 130 will be rolled out over the following two weeks, supported by Saturday opening by all QS firms and new products, such as “Ask the expert”, providing 45 minutes of legal advice for a fixed fee. This presages a move to the widespread use of fixed fees across QS firms, particularly in non-contentious work, with the goal of offering a fixed-fee option for any legal problem.

QS chief executive Craig Holt said “Ask the expert” would be particularly useful in divorce cases, given the impending withdrawal of legal aid, and small claims, where the government proposes to triple the limit to £15,000.

The plan is to have stands in 500 LAPs early next year, said Mr Holt, who described as “monumental” the work that has been required to get to this point since the deal was announced in April. The other 700 stores in the WHSmith estate are either too small or in travel locations, where there will be QS information instead.

The LAPs are 2m wide and 2.75m tall, featuring plasma TVs and big signage. Non-lawyers have been recruited and trained to staff them. Mr Holt said it was an “express advantage” to use non-lawyers as it is likely to make the initial contact with consumers more relaxed.

Citing his mantra of “accessibility and visibility”, he said the stands are “about helping people step over that initial threshold to access legal services”.

The next 50-60 firms to enter the QS network have 110 branches between them. Mr Holt described saturation point for QS as around 600 law firm branches (excluding the LAPs) – there will be approximately 300 after this next tranche of firms goes live.

All QS firms are on course to have Lexcel accreditation by the end of the year, he added.

The barrister predicted that Co-operative Legal Services would roll out its recent pilot of providing face-to-face legal advice in the Co-op’s bank network and said: “I almost wish them well because when the public start becoming accustomed to getting legal services from a brand, it will help us.”