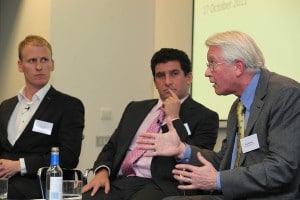 Clients will in future gravitate to trusted brands but independent lawyers can continue to play a major role in providing legal services if they take the necessary steps, the Legal Futures conference sponsored by NatWest heard last week.

Speaking shortly before his Palamon Capital Partners was announced, QS chief executive Craig Holt told the conference that people had a “basic human need for familiarity” that would make them buy legal services from brands, like any other commodity. “There are far too many law firms and no meaningful way for consumers to tell them apart,” he commented.

Mr Holt said the network’s 2012 marketing campaign “will dwarf that of anything ever seen in the legal market”.

Guy Barnett, managing partner of Birmingham solicitors Blakemores, who owns Lawyers2you, stressed the value of lawyers marketing themselves to different communities. As well as running stands in shopping centres, Lawyers2you operates mobile stands at such events as horse shows and Gay Pride events, he said.

But converting the 6,000 leads per month the marketing activity generates was vital, the solicitor added: “The real battleground is not direct marketing, it’s actually getting people to instruct you.”

The key to success is “measurable value”, he continued. If they can provide it, “traditional firms will flourish, as clients favour locality and personal recommendation as major decision drivers”. If they fail to deliver value, “then the major brands will”, he cautioned.

Solicitor Gary Yantin, founder of HighStreetLawyer, which he described as offering a “brandchise”, said there was “room in the legal provider market for a number of legal brands”. The industry was “hugely fragmented”, he said, “but there is still a place for the consumer who wants his legal services delivered by a local high street solicitor”.

Mr Yantin likened HighStreetLawyer to Interflora’s franchised flower sellers’ model. Along with the brand, the franchisee would receive access to “good, consistent referrals” and savings through a back-office buying club.

Ray Gordon, founder of the brand face2face solicitors, which launched in February and announced its first franchise firm last month, told the conference that partnership models were “broken” and the way forward was incorporation.

He said lawyers were facing a “perfect storm” of competitive challenges. But solicitors were not going away: “We are a tough, independent breed and are going to survive.”

Speaking up for the benefits of going it alone, Viv Williams, chief executive of the 360 Legal Group, said many of the brands that entered the Australian market when its legal services market was liberalised had since left.

The qualifications and assurance provided to clients by solicitors “counts for a lot”, he continued. “I feel that we undervalue the brand ‘solicitor’ in the UK. We talk a lot about legal services and not about what the solicitor represents.”

Also addressing the conference was Dan Watkins, a founder of referrals business Contact Law, which is now part of Thomson Reuters and operates the legal portal findlaw.co.uk. He argued that relying on existing clients was insufficient to grow a law firm business.

Contact Law has a call centre in London staffed by 30 paralegal case handlers, who refer about half of enquiries to member firms after screening them. The company receives 11,000 new leads each month, 20% from businesses and 80% from private clients, said Mr Watkins.

In 2010, he said referrals generated £10m of new billings to member law firms, a figure expected to increase in 2011.