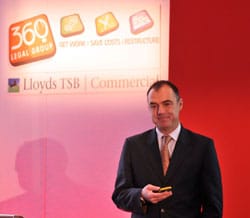 Barnett: focus needs to be on converting leads

The latest national marketing organisation for solicitors could be an attractive takeover target for a big brand looking to enter the legal market, its founder has admitted.

Lawyers2you, the consumer-facing brand of Birmingham law firm Blakemores, is being rolled out nationally, with law firms able to buy exclusive access to leads emanating from their area.

A pilot in Florida is planned for next year as the firm looks to extend the concept internationally as well.

Though stressing that the aim is to support solicitors in maintaining their independence and integrity – and not to sell Lawyers2you – managing partner Guy Barnett said being taken over by a big brand was one option for the future.

He also revealed that he had been talking to WHSmith about piloting Lawyers2you in a handful of stores before QualitySolicitors came along with more rapid expansion plans.

Lawyers2you was formally launched in January 2010 and now has 30 stands with a periodic presence in 50 shopping centres across the midlands, as well as other locations and sporting and cultural events, ranging from equestrian competitions to biker festivals.

In August it generated around 4,800 leads for Blakemores and Mr Barnett said conversion rates – depending on the area of law – ranged from 15% to 38%. He said too many lawyers focused on marketing their services, “because that’s the fun bit”, and not on what happens when a potential client gets in contact.

Lawyers2you has a dedicated contact centre – which Mr Barnett called a “listening centre” – open from 7.30am to 8pm during the week, and 9am to 5pm at weekends. The firm itself is open seven days a week as well.

The package – a part franchise, part marketing arrangement – will see Lawyers2you set up stands in high footfall areas around the country and direct potential clients, via the contact centre, to the local firm which has bought the area. This will be augmented by other initiatives to create income streams, plus group buying of insurance, stationery and the like.

Mr Barnett has broken the UK into 169 different areas (firms can buy more than one), and hopes to expand gradually into them, with 30 firms in place by the end of next year and a further 30 by the end of 2013. Six firms are set to trial the concept until the end of the year, with south coast firm Kiteleys the first, covering Hampshire and Dorset. The rest will be announced next month. Firms will pay a percentage as a franchise fee.

The solicitor explained that part of the motivation for the move was that while some services could be provided by Blakemores wherever the client is, “you do need a local presence for some products”.

Firms have to be able to service a broad range of legal needs, including legal aid, to become involved. The details of the quality and service standards are still being worked out, although Blakemores will require firms to open on Saturdays. National marketing may begin in the second half of 2012.

Lawyers2you is working with the 360 Legal Group in developing the network, and 360’s chief executive Viv Williams said: “Many law firms have an adverse reaction when the word sales is mentioned and have traditionally waited for new instructions by advertising and recommendation. Lawyers2you adds a new dimension to the marketing mix and those firms who become franchises will have leads generated for them.

“However much firms spend on marketing their services, they need to invest significantly more in leaning how to convert these leads into new instructions. The 360 legal group will be working with Lawyers2you to ensure the leads generated will be converted into new business. Blakemores have proved that the model works and by using their experience and call centre knowledge, the firms selected will generate more than sufficient new business to justify the modest cost.”

Mr Barnett identified his competition as QualitySolictors, other firms adopting his model (but without the economies of scale he has built up), the Co-op, and insurance companies that become alternative business structures.

He said the concept had generated significant interest from foreign lawyers travelling through Birmingham airport, where Lawyers2you has a stand, and that the intention had always been to expand internationally (hence why they did not choose the name Solicitors2you). “I’m looking to test the water in the States next year,” Mr Barnett said. He will partner with a law firm in Florida to see how the model could be adapted for the US.