Best-kept secret in the legal world? Fifth of all law firms are Connect2Law members 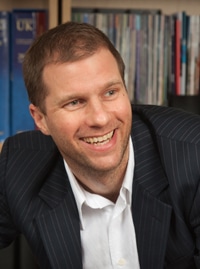 Layfield: supporting other law firms to maintain their independence

A fifth of all law firms are now members of legal referral and support network Connect2Law, it has emerged.

Set up a decade ago by Manchester law firm Pannone, Connect2Law now has 2,240 members, mainly in England and Wales – where there are 11,000 law firms in total – with hopes of reaching as many as 3,000 by the end of 2011 on the back of a marketing campaign starting today.

Connect2Law was launched to help law firms offer their clients a full service proposition by referring to Pannone work they could not undertake themselves.

Referring firms usually receive an upfront payment as well as a share of the fees at the end of the matter. There are written non-poaching agreements.

Currently lawyer-to-lawyer referrals are not caught by the Solicitors Code of Conduct rules on referral arrangements. Though this will change under the new code coming into force on 6 October, Pannone partner Charles Layfield, who is responsible for the strategic development of Connect2Law, said it is likely to mean simply introducing the same degree of transparency required for referrals from non-lawyers.

Since 2001, 20 leading regional firms have bought a Connect2Law franchise to create and manage their own hub and spoke models. Connect2Law members are generally firms of 10 partners or fewer.

Mr Layfield said that as well as wanting more firms to join the network, the marketing campaign aimed to “flag up to the outside world that there are solutions for people looking for panels of law firms”.

Members have access to a buying group, CostController, which saves on average 20% on  core overheads.

He would not reveal how much Connect2Law contributes to Pannone’s income and profits, saying only: “It’s a major client of ours.”

Mr Layfield continued: “Connect2Law has been a success story for many years but has been the best-kept secret in the legal profession. We decided now was the right time to make more people aware of the network and its many unique benefits.

“Connect2Law is continuously evolving and we believe is a truly unique service to law firms. It’s not about taking firms’ money and trying to do their marketing which is the sum of many legal networks.

“Connect2Law is about law firms supporting other law firms to maintain their independence and provide them with additional tools to operate as independent and successful businesses in their own rights.”