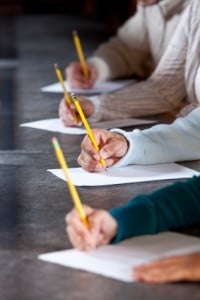 There are a number of risks and dangers associated with using an aptitude test to select law students – particularly that it will favour those from privileged and certain class and ethnic backgrounds – a report commissioned by the Legal Services Board (LSB) has concluded.

It comes hot on the heels of a similar report commissioned by the Law Society and revealed by Legal Futures on Monday.

Dr Chris Dewberry, from the Department of Organisational Psychology at Birkbeck College, University of London, said that compared to many other methods which can be used to select students, aptitude tests have a number of practical advantages and have high “predictive validity”.

However, he warned that the tests can be construed as more precise and accurate than they actually are and do not measure the extent to which someone has an innate suitability for a particular educational programme, training course or job.

“In fact, partly because aptitude tests are measuring [general cognitive ability], people’s scores on measures of aptitude are influenced by the environment they have experienced (including family background and educational opportunities and experiences) as well as by innate potential.

“For this reason, people from privileged educational, family and cultural backgrounds will tend to do better than others on aptitude tests.”

Dr Dewberry added: “Because differences in environment are systematically associated with large social groupings, including social classes and ethnic groups, it is likely that there will be systematic differences in the average performance of people from these groups on aptitude tests.”

The academic finished by recommending 12 criteria any organisation seeking to use aptitude testing in legal services should consider, including looking closely at the extent to which “systematic sub-group differences” exist.

The LSB said it commissioned the research to inform its consideration of any future request to introduce aptitude testing, and to explore whether such tests could help enhance diversity and fair access to the profession by testing the potential of aspiring lawyers on a “level playing field” where inequalities in prior educational attainment are irrelevant.

It said the report should also prove a “valuable contribution” to the review of legal education and training requirements that the Solicitors Regulation Authority, Bar Standards Board and ILEX Professional Standards are currently leading.