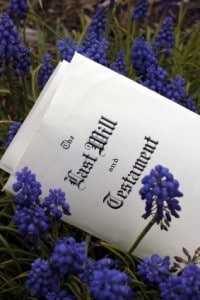 The Legal Services Board (LSB) is to fast-track a decision on whether to regulate will-writers, it has emerged, with its consumer panel launching a formal investigation as a first step.

After hosting a workshop on the issue last month with various stakeholders, the LSB said that because of concerns expressed about will-writing, it will look at the case for regulation “on a more rapid timetable” than its ongoing review of reserved legal activities generally.

As well as the work of the Legal Services Consumer Panel, there is to be research aimed at building up a “cohesive evidence base of what is happening in practice, why it happens and the impacts”.

A report on the workshop just published by the LSB says: “A complex picture of different ways in which a consumer could potentially be harmed was presented by the attendees. Concerns raised confirmed that the regulation of will-writing is an area that the LSB should be investigating in the near term. However, there is not a clear and accepted picture of the extent and impacts of the different types of problems that exist. Therefore, it is not possible to conclude at this stage what the protections should be or that one approach will solve all of the problems.”

The Office of Fair Trading (OFT) estimates that 47% of people have a will. Consumer panel manager Steve Brooker presented National Consumer Council figures to the workshop that indicated growing demand for alternatives to solicitors for preparing wills. Though currently solicitors have nearly three-quarters of the market, in future that could fall to less than 60%, he said.

Mr Brooker identified a wide variety of other suppliers, including ‘ABSs in waiting’ such as Halifax Legal Express and the Co-op, and online providers. Twenty trade unions advertise free/discounted wills as a benefit, he added, with Thompsons and Russell Jones & Walker key providers. He said Thompsons prepares 10,000 wills a year.

Solicitors Regulation Authority statistics shows that 4,364 law firms provide wills, trusts and tax planning advice. The Institute of Professional Will Writers – one of four will-writer trade bodies – estimates there are around 2,000 non-lawyer will-writers in 600 firms.

LawPack, the leading provider of DIY wills, which was represented at the workshop, sells around 200,000 packs a year.

Mark Pratt, legal services team leader at the OFT, told the workshop that the OFT is not against making will-writing a reserved activity, but is against extending regulation without a cost-benefit analysis looking at what problems exist in the market, who is causing them, the effectiveness of current consumer protection and whether it can be improved, and what effect, if any, reserving would have on the market.

Legislation to regulate will-writers is currently going through the Scottish Parliament (see story [2]).