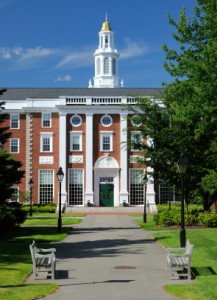 Harvard: ethical training is all about giving practitioners a practical toolkit they can use to protect their own integrity and to build public trust, says Kenny

Legal Services Board chief executive Chris Kenny has spoken out in favour of the “holy grail” of diversity neutral aptitude testing across legal careers.

Addressing a legal education conference at Harvard University in America – one of the first times the LSB has seriously addressed its role in legal education – Mr Kenny also hit out at lawyers who see their ethical training as creating “a wall of professional exclusivity”.

The Bar Standards Board is currently piloting an aptitude test for bar professional training course students, while, as first revealed by Legal Futures (see story), the Law Society is considering a test for would-be legal practice course students.

Mr Kenny referred to work being done at Berkeley University about the development of aptitude testing to assess the scope to develop the skills of effective lawyering. “If this work can be successfully developed, it perhaps points towards the holy grail of a selection mechanism which can be genuinely diversity neutral, including addressing relative educational disadvantage, whilst also protecting those who really do not have the potential to progress from incurring significant levels of debt,” he said.

He added: “It would be interesting to see how this methodology could be applied at other career stages, rather than simply the decision to admit.”

Mr Kenny said professional ethics should be a “key touchstone” in the development of legal education, noting the “passionate debate at the moment about whether this should be included in undergraduate courses in the UK, on which the board has not taken any view. But ethical literacy is clearly a sine qua non for any practitioner, and it is hard to argue against its regular inculcation”.

But he added a note of caution: “Undoubtedly, the most jaw-dropping comment I have heard in my 20 months in this job was a comment from a practitioner at a conference last year that ‘You have to understand that we lawyers are more ethical than the general population because we are trained in it’. I lose count of the ways in which that comment is both wrong-headed and deeply offensive. It is easily rebutted – let’s just count how many degrees in moral philosophy Torquemada and his fellow inquisitors had – but it does highlight a real danger.

“Ethical training is all about giving practitioners a practical toolkit they can use to protect their own integrity and to build public trust. It’s not about building a wall of professional exclusivity to protect moralising self-righteousness. Deference to the professions is crumbling and using ethics as a way of restoring it is self-defeating, not least in leading to a distrust of the ethical code itself.

“Ethical training is clearly closely related to ensuring the maintenance of clear standards of conduct. As regulation in the UK moves to a model which is more outcome focused – and, I would contend as a result more ethically focused by looking at the spirit of regulation rather than the letter of rules – it is vital that education at all stages reinforces norms of acceptable behaviour.”

Also in the speech, Mr Kenny suggested that the boundary between “what is essentially still an apprenticeship model… and the culture of lifelong learning” is collapsing. “It seems unlikely that simply placing a bald requirement for x hours of undefined continuing professional development, done at the initiative of the individual practitioner alone, will look like a credible management development strategy for many firms in the future.” He

He argued too that alternative business structures (ABSs) will accelerate the trend of lawyers being prepared to trade off partnership and higher returns for a better work/life balance and lower risk. “New firms that gain a reputation for ‘good employer’ practices are likely to build a strong brand within the labour market, quite as much as within the legal services market.”

Mr Kenny’s speech will be followed next month with a major address on legal education by LSB chairman David Edmonds. Mr Kenny said the LSB has not been active in the area until now because of other priorities, nobody among the LSB’s 34 staff with a direct background in legal education and wariness because of the complexity of the issues, “where questions are easier to frame than answers”.