This is the second part of the interview by Legal Futures Editor Neil Rose with Professor Richard Susskind on the publication of an updated edition of his book, The End of Lawyers? (for the first part, published yesterday, click here) 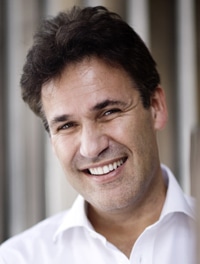 The new introduction to the book contains some new thinking and practical guidance – a tool for analysing the legal market, four models for legal businesses and two strategic techniques (see story).  “Some of this is more like the kind of thing I do as a consultant when I’m advising firms,” Professor Susskind explains. “I don’t do the kind of wild theorising. I have to sit down and be very practical.” It is time for the theoreticians to step aside and for the practitioners to take over, he says, “because actually even if you buy into the need for change, you maybe need some tools to help structure your thinking and add some frameworks to help the planning in a more systematic way.”

One of Professor Susskind’s roles over the last couple of years – which is not addressed in the book – has been advising private equity company Lyceum Capital as it eyes up the legal market.

He says the experience has helped him see what is less and more likely to happen as regards alternative business structures (ABSs). “I think many law firms felt that, with private equity, huge amounts of capital would just come into mainstream firms for mainstream businesses and they could retire and sail off into the sunset. But that’s not how it’s going to be.

“There are certain areas of high-volume, low-margin work that are inherently attractive to a more business-minded investor. Even in major firms I think there’ll be areas of work which aren’t mainstream – peripheral, growing, more imaginative add-on work, say consulting services or technology services – that you’ll find receiving investment.”

Obviously he will not be drawn into the detail of Lyceum’s plans, and emphasises that he is not speaking for them, but says “it’s safe to say they’ve looked right across the entire profession”. What has impressed him is “the clinical businesslike analysis” that Lyceum has undertaken of the full range of legal services. The reality is that some multi-billion pound areas of work like probate and personal injury are “often being conducted in a cottage industry fashion”. He adds: “There must be scope for bringing to bear the technologies and techniques that have been used in other sectors.”

But Lyceum’s first legal sector investment has been in a legal process outsourcing company. The rationale is simple, says Professor Susskind. “As a market, [LPO] is expanding a lot more rapidly than conventional legal services. So whether you’re an accounting firm thinking of getting into the legal profession again, and they will, whether you’re a venture capitalist, whether you’re a private equity firm, whether you’re a legal publisher – and some of them are pretty expansive – you tend to look for the areas that are expanding at the greatest rates and that’s not conventional lawyering.” The other alternative, he adds, is to look for areas where you think there are great inefficiencies.

His mention of legal publishers is interesting, because though some of them are, as he says, the biggest legal businesses in the world, they do seem to fly under the radar in some ways. For him, the most significant single event of 2009 was Deloitte selling its tax compliance tool Abacus to Thomson Reuters. In the new introduction, he highlights four lessons arising from this, one of which is that “law firms and publishers may come to compete in the provision of online legal services”.

It is still hard for many lawyers to see their working lives migrating online, but it seems inexorable. Professor Susskind points to the success of US online legal document provider LegalZoom, which research shows has now served over a million customers by making the law more accessible.

But “the big revelation for me” was discovering that eBay runs an online service that resolves an astonishing 60 million disputes a year. “Almost all of their disputes are resolved in one way or another online and it interests me that most sensible people just want to get on with their lives.”

And Professor Susskind is getting on with his life now by moving away from the legal profession. Though this book provides lawyers with tools, his preference is to author books that “change the way people look at things, widen their eyes and so forth”. So next up, in conjunction with his sons, is a book on the future of the professions more generally.

This will focus on “the deal that the state has with the professions”, where for a couple of centuries now “certain occupational groups are given essentially monopoly rights over particular bodies of specialist knowledge”. The question then is whether professionals are jealous guards or benevolent custodians. “The worry is that some people in the professions are jealous guards and what they’re trying to do is mark out an area that is an important area of social endeavour, but are suggesting, I think disingenuously, that this needs only to be the province in a certain group of individuals. And I think we can challenge that right across the professions.”