Susskind: ABSs give UK first mover advantage if firms are up to the challenge 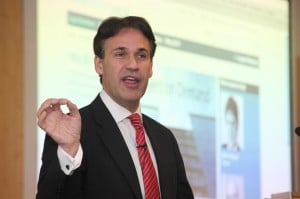 Susskind: lawyers have to provide more for less

In a fast-paced and wide-ranging keynote address covering the gamut of pressures and opportunities facing lawyers, Professor Susskind said it was “unimaginable” that investors and entrepreneurs would ignore the opportunities presented by legal market.

He predicted that only lawyers who could deliver better and more accessible legal services at a lower cost – “more for less” – would flourish in future.

The global demand for value for money is growing, he said. “I am speaking to general counsel, in-house lawyers… who are under pressure to take 50% off their legal spend with external law firms. This is pressure of an unprecedented sort,” he said.

He said it was a misconception that law firm process changes already underway – in which work is broken down, complex matters separated from routine processes, and each handled wherever it can be done most efficiently – do not apply to the “high end of the market”. The view is “fundamentally mistaken”, he said. Even the largest deals and disputes in the world can be broken down and have elements susceptible to standardisation.

Professor Susskind, who has law professorships in Glasgow and London and is IT adviser to the Lord Chief Justice, reported that he frequently travels to jurisdictions where the legal services market is restricted. He has found the lawyers there acutely aware of developments in this country, but are hampered by laws preventing them from innovating themselves. “We’ve actually got a competitive advantage, potentially, for a short period of time to build a legal industry that’s more competitive than others,” he said. Last week, the American Bar Association started down the road to seeing ABSs in the US.

He doubted the market would be transformed “overnight” after ABSs become lawful in October and predicted that medium-sized firms would merge to survive. Traditional general practitioners will be hardest hit, he warned, “because so many of them are doing routine and repetitive work that will be alternatively sourced”.

How ABSs will pan out is unclear and it is “terribly early days”, but one thing is certain, he said: “We can be absolutely confident… that this multi-billion pound sector will attract external investment… The idea that there’s that much value in the market and that entrepreneurs and capital is going to ignore it is unimaginable.”

Law firms hold few attractions to private equity investors because there is no obvious exit route and little profit, he said, predicting that external investment will be made exclusively in new forms of legal business: “These are the businesses that are growing; doubling, tripling, quadrupling every year. Of course they’re going to attract investment.” Professor Susskind is a consultant to Lyceum Capital, the private equity business that has been most open about its interest in the legal market.

The mindset of some lawyers that the profession is unique among industries and so cannot change is a “distraction”, he said. So are “turf wars between regulators and professional bodies”, attempts to “ring-fence traditional lawyering” and a reluctance among lawyers to embrace information technology.

Another mindset flaw is the belief that lawyers are somehow capable of mastering unfamiliar disciplines with minimal training, such as project management. This amounts to a “collective arrogance”, he said. Lawyers have to consider becoming skilled “hybrids”, he suggested, for instance legal process analysts who are expert in breaking down legal work, or legal project managers, or legal risk managers who focus on helping clients avoid problems rather than resolve them.